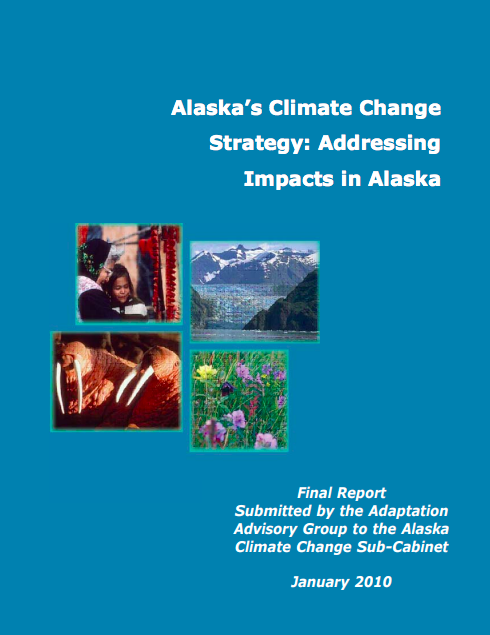 In Alaska, climate change has begun to touch almost every aspect of the natural world and the human systems that have evolved around, and rely on, a set of stable and predictable climatic conditions and seasons. It is a world where a warming environment has already begun to render ground and building foundations unstable, disrupt transportation routes, and trigger phenomena placing coastal communities in imminent danger from flooding and erosion. Impacts have resulted in myriad consequences to residents of the state, to subsistence livelihoods, to the wildlife and vegetation in Alaska’s terrestrial and marine environments, and to the many industries that support the Alaskan economy. While these changes are of critical import to Alaskans, they have also garnered attention of leaders in the United States and around the world.

The primary driving force has been the accelerated retreat of Arctic sea ice, which has been a catalyst for multi-disciplinary planning and has underscored the need for increased domestic and international cooperation. A navigable Arctic Ocean presents opportunities for shipping and commerce in the Northwest Passage and has elevated interest in developing fisheries and mineral resources. Consequently, this creates a need for additional and improved weather and navigational tools, research to better understand and manage our strategic assets, and increased efforts to provide national, environmental, and economic security. Widespread interest in the Arctic has also been elevated by the important role that the Earth’s polar region plays in influencing climate and oceans on a global scale. What happens in Alaska has far-reaching and long-lasting implications.

The Arctic Climate Impact Assessment, a comprehensive assessment conducted by hundreds of scientists and indigenous peoples, confirms that the Arctic is now experiencing some of the most rapid and severe climate changes on earth and is extremely vulnerable to both observed and projected climate change and its effects. To address the impacts of climate change on Alaska, Governor Sarah Palin signed Administrative Order 238 on September 14, 2007, which established and charged the Alaska Climate Change Sub-Cabinet to advise the Office of the Governor on the preparation and implementation of a comprehensive Alaska Climate Change Strategy (AO 238). This document represents the recommendations of the Adaptation Advisory Group (AAG), which was charged with evaluating and developing options to adapt to climate change. The report also provides additional background on projected climate and impacts for Alaska. The types of recommendations contained in this report vary. The options range from new systems approaches and institutional structures to adoption of new or revised policies, initiatives, and other actions. The Sub-Cabinet will consider these, as well as recommendations from the Immediate Action Work Group, the Mitigation Advisory Group, and the Research Needs Work Group in the context of other complementary efforts. A comprehensive Climate Change Strategy for Alaska will then be drafted for consideration by the Governor. While no one report or event can set a definitive course of action in the dynamic and uncertain set of circumstances created by a changing climate, the work of the Adaptation Advisory Group establishes a foundation from which to make progress towards improving our individual and societal ability to adapt.