Beyond Unintended Consequences: Adaptation for Gulf Coast Resiliency and Sustainability 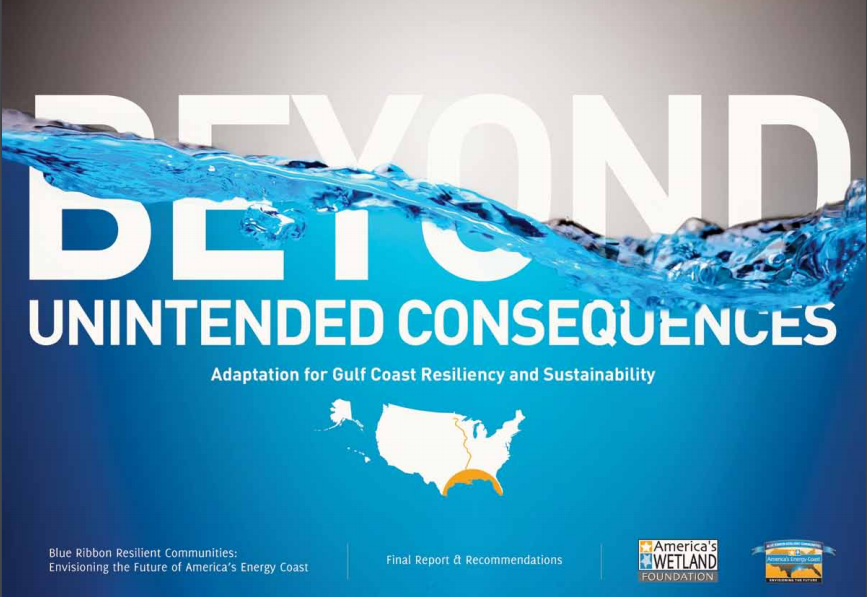 The Gulf Coast faces a constant storm. Man’s efforts to tame the Mississippi River with flood control structures have led to many unintended consequences, primarily the degradation of the Mississippi River Delta. Throughout the Gulf Region, land loss caused by subsidence, sea-level rise, and the alteration of critical environmental processes has stripped the Gulf Coast of its natural defenses and is accelerating the collapse of coastal ecosystems.

A decade of catastrophic events marked by Hurricanes Katrina, Rita and Ike, and the Deepwater Horizon oil spill, have further devastated one of the most fragile landscapes on the planet. Such incidents have highlighted the region’s significance and its vulnerabilities, yet complacency and a false sense of security have returned. Disasters that should have sparked a reckoning instead produced only minor reforms, and so the status quo has become yet another force battering the Gulf Coast.

The deterioration of America’s WETLAND and key assets of America’s Energy Coast is jeopardizing the tremendous benefits provided by a healthy Gulf Coast to the nation. Yet, even as awareness of the Gulf’s importance grows, this recognition faces a policy and regulatory reality that responds to consequences but does not work to achieve real sustainability. Comprehensive solutions must be implemented or the region’s irreplaceable resources will be lost in a matter of decades. Katrina, Rita, Wilma, Ike, Gustav, Isaac: the next big storm is always here.

There is a movement afoot, however, to face reality and adapt to change. This empowerment comes in the form of community efforts, comprehensive state plans for coastal restoration and protection, public/private partnerships, and self-taxation to provide emergency funding for projects that cannot abide an onerous and expensive federal process.

Consider the unfortunate example of Louisiana, where the costly practice of waiting for disaster to strike has exacted an astronomical post-Katrina toll — just to bring coastal communities back to pre-storm conditions. The $140 billion in estimated recovery costs makes earlier projections of $14 billion for coastal restoration seem like a bargain today. To protect national, state and local assets now, a minimum of $50 billion is required to save the coast in Louisiana alone. The price tag may seem high, but will we again make a tragic miscalculation and wait until the damage is done?

This report reflects a combination of grassroots experience and scientific research. Eleven forums were held over 14 months across five states seeking answers to how a faltering coastal landscape can be made more resilient in an age of mounting challenges. Some of the recommendations are common sense. Others will require a push from Washington to move past years of failed practices and outdated, conflicting federal processes that too often slow or stop real restoration.

Gulf Coast communities have welcomed self-inspection, criticism and the resolution of historical differences because they must. This has not been a perfect process, but it has been effective, and it demands action.

Blue Ribbon Resilient Communities across the Gulf are working to stop merely reacting to unintended consequences. The goal is to anticipate, to prepare and, most of all, to adapt. Join us as we move swiftly to prevail against the constant storm.