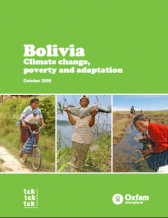 Bolivia is particularly vulnerable to the impacts of climate change for six basic reasons:

1. It is one of the poorest countries in Latin America and suffers from one of the worst patterns of inequality. Low-income groups in developing countries are the most exposed to climate change impacts.

2. It is the country in South America with the highest percentage of indigenous people, where much of the poverty and inequality is concentrated.

3. It is one of the most bio-diverse countries in the world, with a wide variety of ecosystems that are vulnerable to different impacts from climate change.

4. More than half of the country is Amazonian, with high levels of the deforestation which adds to the vulnerability to flooding.

5. Located in a climatically volatile region, it is one of the countries in the world most affected by ‘natural’ disasters in recent years.

6. It is home to about twenty per cent of the world’s tropical glaciers, which are retreating more quickly than predicted by many experts.

In July 2009 a team of Oxfam researchers travelled to three areas of Bolivia (Trinidad in Beni, the Cochabamba valleys and Khapi under Mount Illimani, in La Paz) to take a snapshot of how poor families are experiencing the changing climate, and how they are adapting to it. The researchers also interviewed key government and international officials, social movements and NGO representatives. The main findings and recommendations of this report are:

Poor women and men throughout Bolivia are already experiencing the consequences of climate change, but in most cases are illequipped to adapt to the present and future impacts.

The perception of many villagers and local farmers is that the climate is already changing in terms of the unpredictability of the rainfall, more extreme weather events and higher temperatures, with negative impacts for their livelihoods.

Oxfam International has noted that in recent years the frequency and magnitude of damage from the extreme weather events have increased. Women are often the hardest hit, as they are often the ones left to tend small farms and families, and have fewer alternative livelihoods when crops are lost.

Of these, Oxfam International is particularly concerned that poor women and men and indigenous peoples will be affected by the effect of unpredictable weather on agricultural production as this could lead to less food availability and/or higher food prices.

Oxfam International believes that it is deeply unjust that poor communities and families in Bolivia and other South American countries are having to pay a high price for a situation for which they have virtually no historical responsibility.

In the three areas visited for this report local people, and particularly women, are already experimenting with ways of adapting to the changes in the climate. The ‘camellones’ project in Trinidad offers a promising example of poor women using ancient technologies to find a way of improving food security, adapting to flooding and reducing deforestation.

The government of President Evo Morales is beginning to take climate change seriously. However, it is still in the early stages of developing national policy and practical adaptation programmes. A major effort will be required to scale up the institutional, financial, and technical capacity to address the climate challenge.

Oxfam International´s concern is that the opportunities being opened up by the change process in Bolivia to reduce poverty, particularly amongst the indigenous population, will come under severe pressure from climate change impacts.

The establishment of the Platform of Social Organisations against Climate Change is a positive development to put pressure on national and international governments to combat the impacts of global warming. It is already having a major impact on government policy and awareness-raising.