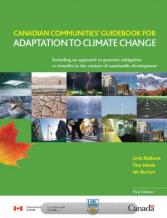 Many local governments have already begun working on decreasing greenhouse gas (GHG) emissions. Recently, a growing number have begun examining ways to adapt to climate change – the act of reducing climate change impacts that are already underway. This Guidebook is intended to help those who are looking for ways to reduce the impacts of climate change (increasing heat waves, water shortages, intense storms and sea-level rise) while decreasing GHG emissions and ensuring sustainable development for their communities. Several different methods can be used to adapt to climate change. Some of these methods contribute to reducing greenhouse gas emissions while increasing long-term sustainability. Expanding the tree canopy in urban centres, for example, helps to reduce the impact of an increasing number of hot days and heat waves. It also reduces the need for air conditioning, and so reduces greenhouse gas emissions from fossil-fueled electricity generation. Healthy trees also decrease the impact of intense rainfall, stormwater runoff and pollution – increasing sustainability for our communities.

Climate change impacts will affect societies in complex and broad-ranging ways as technological, economic, social and ecological changes take place across regions, groups and sectors. Ecological impacts have cascading effects on social and health outcomes. Infrastructure problems have profound economic effects, such as the estimated $10 billion US price tag resulting from North America’s 2003 power outage. Cities, regions and countries are linked through the global political economic system so that impacts in one area of the world may affect other areas through economic forces, such as prices for agricultural products, or pressures including international migration.

In North America, vulnerability to climate change will depend on the effectiveness and timing of adaptation, as well as the distribution of coping capacity. While Canada has considerable  adaptive capacity when compared to many less developed nations, vulnerability and adaptive capacity are not uniform across our society. Socially and economically disadvantaged populations are likely to have less adaptive capacity than the population as a whole, and climate “surprises” may bring weaknesses in adaptive capacity to light that were not previously recognized (e.g., the 1988 Ice Storm, Hurricane Katrina or the 1995 Chicago heat wave). Community attributes, including social networks, social cohesion, volunteerism, economic and income diversification, contribute to adaptive capacity and resilience. Societal impacts will therefore depend on factors such as wealth, infrastructure quality, emergency preparedness, healthcare, community vitality, economic and governance system structure, and population growth.

Adaptation, Mitigation and Sustainable development (SAM) are often developed separately at the local government and community level. Recognition of the need to integrate climate risks into development priorities and decision making is the principal driving force behind the development of the SAM project. A number of methods are possible for the integration of adaptation and mitigation in the context of sustainable development. This Guidebook provides one such method.