Changes in Population Susceptibility to Heat and Cold Over Time: Assessing Adaptation to Climate Change 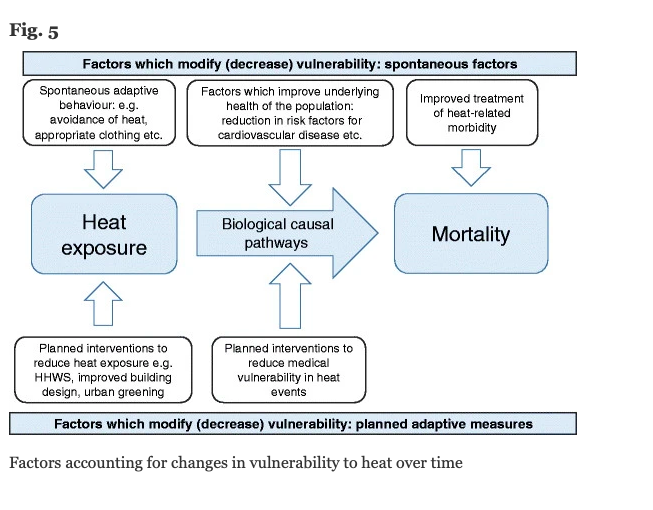 In the context of a warming climate and increasing urbanization (with the associated urban heat island effect), interest in understanding temperature-related health effects is growing. Previous reviews have examined how the temperature-mortality relationship varies by geographical location. There have been no reviews examining the empirical evidence for changes in population susceptibility to the effects of heat and/or cold over time. The objective of this paper is to review studies which have specifically examined variations in temperature-related mortality risks over the 20th and 21st centuries and determine whether population adaptation to heat and/or cold has occurred.

We searched five electronic databases combining search terms for three main concepts: temperature, health outcomes, and changes in vulnerability or adaptation. Studies included were those which quantified the risk of heat-related mortality with changing ambient temperature in a specific location over time, or those which compared mortality outcomes between two different extreme temperature events (heatwaves) in one location.

There is evidence that across a number of different settings, population susceptibility to heat and heatwaves has been decreasing. These changes in heat-related susceptibility have important implications for health impact assessments of future heat-related risk. A similar decrease in cold-related mortality was not shown. Adaptation to heat has implications for future planning, particularly in urban areas, with anticipated increases in temperature due to climate change.