Chapter 17: Vulnerability of Coral Reefs of the Great Barrier Reef to Climate Change 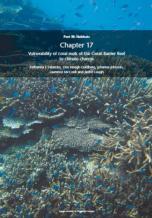 The Great Barrier Reef (GBR) contains the most extensive coral reef ecosystem on earth. It consists of 2900 coral reefs and 900 coral cays that cover approximately 20,000 km2 of the total 345,000 km2 area of the GBR Marine Park. As a consequence of unusually high summer sea surface temperatures, between 42 to 60 percent of the reefs of the GBR experienced mass coral bleaching in 19988. Bleaching was also reported from 31 other nations around the world during 1997–1998. For example, about 50 percent of reefs in the Indian Ocean and south Asia lost much of their coral cover, and an estimated 16 percent of the world’s area of coral reefs was severely damaged. The event coincided with the strongest recorded El Niño-Southern Oscillation event (ENSO) and one of the warmest years on record. In early 2002, another mass bleaching event occurred on the GBR, exceeding the 1998 event in scale and severity. Again, it was linked to record summer sea surface temperatures, despite weak ENSO activity. These bleaching events alerted the world to the vulnerability of coral reefs to climate change. The responses of reef-building scleractinian corals are now much better understood than those of other groups of reef associated organisms (Hoegh-Guldberg et al. chapter 10). This chapter reviews what is known of the vulnerability of GBR coral reefs to climate change at the ecosystem level. We consider how the ecosystem is affected by: i) increasing sea temperature, ii) irradiance, iii) ocean acidification, iv) frequency of intense tropical storms and v) altered rainfall and river flood plumes. The chapter focuses on the ramifications of increased coral mortality on ecosystem functions, including rates of calcification and erosion, reduced structural complexity and thus provision of habitat and shelter for reef-associated species. The chapter also considers the implications of significant loss of coral cover resulting in shifts in trophic structure and competitive advantages for some species within the ecosystem.

Assessing the vulnerability of GBR coral reefs at an ecosystem level is complicated due to the natural complexity of the system. The GBR  ecosystem has a range and diversity of habitat types represented by over 70 distinct reef and non-reef bioregions identified based on their contrasting geophysical and biological characteristics. These bioregions represent a gradient from tropical to subtropical reefs (between 12 to 24 °S), and across the continental shelf from turbid and shallow coastal reefs to reefs in deep blue-water oceanic environments. Additionally, extensive submerged coral reefs, coral communities and coral-associated organisms occupy parts of the deep seafloor. The GBR has high biodiversity and complex interactions, which all contribute to a greater or lesser extent to shaping the ecosystem. The coral reefs of the GBR are formed by the calcium carbonate skeletons of  over 400 species of hard corals, the carbonate deposits of a number of calcifying algae, foraminifera, molluscs, tube-forming annelid worms and octocorals, as well as abiotic carbonate precipitation. These complex carbonate structures form the habitat for many tens of thousands of species of protozoans, fungi, marine plants and animals. For example, more than 1000 species of marine plants, 1500 species of sponges, 4000 species of molluscs, 800 species of echinoderms and over 1500 species of fish have been recorded on the GBR to date, with new species being added every year. This high habitat and species diversity contributed to the listing of the GBR as a World Heritage Area in 1981. An assessment of the vulnerability of such a complex system, in which not all of the key processes are currently understood, will necessarily be simplistic and can only focus on a few of the processes and interactions that are presently better understood.