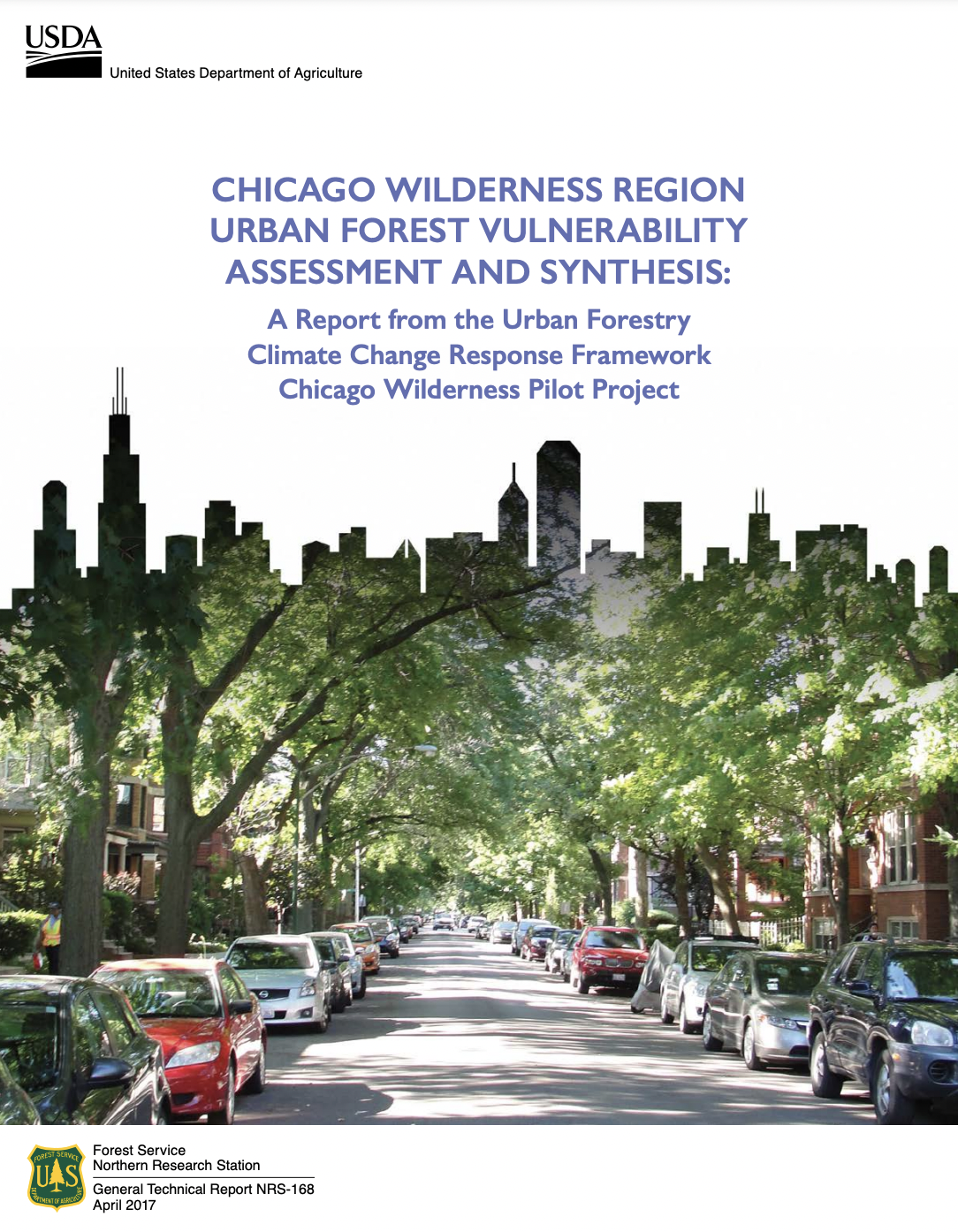 The urban forest of the Chicago Wilderness region, a 7-million-acre area covering portions of Illinois, Indiana, Michigan, and Wisconsin, will face direct and indirect impacts from a changing climate over the 21st century.

This assessment evaluates the vulnerability of urban trees and natural and developed landscapes within the Chicago Wilderness region to a range of future climates. We synthesized and summarized information on the contemporary landscape, provided information on past climate trends, and illustrated a range of projected future climates. We used this information to inform models of habitat suitability for trees native to the area. Projected shifts in plant hardiness and heat zones were used to understand how nonnative species and cultivars may tolerate future conditions. We also assessed the adaptability of planted and naturally occurring trees to stressors that may not be accounted for in habitat suitability models such as drought, flooding, wind damage, and air pollution. The summary of the contemporary landscape identifies major stressors currently threatening the urban forest of the Chicago Wilderness region. Major current threats to the region's urban forest include invasive species, pests and disease, land-use change, development, and fragmentation.

Observed trends in climate over the historical record from 1901 through 2011 show a temperature increase of 1F in the Chicago Wilderness region. Precipitation increased as well, especially during the summer. Mean annual temperature is projected to increase by 2.3 to 8.2F by the end of the century, with temperature increases across all seasons. Projections for precipitation show an increase in winter and spring precipitation, and summer and fall precipitation projections vary by model. Species distribution modeling for native species suggests that suitable habitat may decrease for 11 primarily northern species and increase or become newly suitable for 40 species. An analysis of tree species vulnerability that combines model projections, shifts in hardiness and heat zones, and adaptive capacity showed that 15 percent of the trees currently present in the region have either moderate-high or high vulnerability to climate change, and many of those trees with low vulnerability are invasive species.

We developed a process for self-assessment of urban forest vulnerability that was tested by urban forestry professionals from four municipalities, three park districts, and three forest preserve districts in the region. The professionals generally rated the impacts of climate change on the places they managed as moderately negative, mostly driven by the potential effects of extreme storms and heavy precipitation on trees in the area. The capacity of forests to adapt to climate change ranged widely based on economic, social, and organizational factors, as well as on the diversity of species and genotypes of trees in the area.