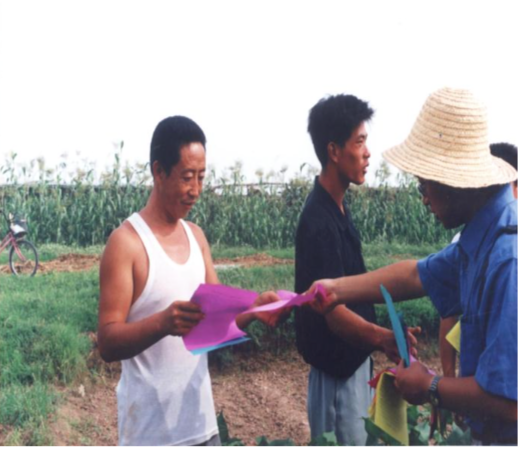 Photo attributed to the Work Bank. [Screenshot from report]

The 3H Plain is a critical part of China’s agricultural economy. It contains 26% of the country’s arable land and represents almost one third (32.8%) of all the land under cultivation. At the same time, this is an area of China that is already water stressed; per capita availability was one third of the national average and only one half of UN standards.

When it became clear that climate change, in the form of increased temperatures and decreased rainfall, was impacting the future of agriculture, the government took action. Initially, the response came through a World Bank financed project beginning in 2004 that focused on improving irrigation in the region. World Bank project funding was supplemented in 2006 with a GEF grant dedicated to mainstreaming climate change adaptation into the agricultural sector in the 3H area.

Experts introduced a new variety of wheat in the area, but adoption took several growing seasons. Government-led pilot programs introducing new techniques to better manage irrigation water took hold after farmers saw benefits. Also, the formation of water users associations and the involvement of a prominent women’s’ organization provided forums to tell farmers about climate change impacts and to introduce training in new techniques. Initial outcomes include: the introduction of new wheat varieties more resistant to future growing conditions; major improvements in irrigation that reduces run-off as well as evaporation; and altered planting calendars to take advantage of changing conditions. The CAD continues to monitor farm activities in the area, as well as climate conditions to be able to help farmers make adjustments if necessary.