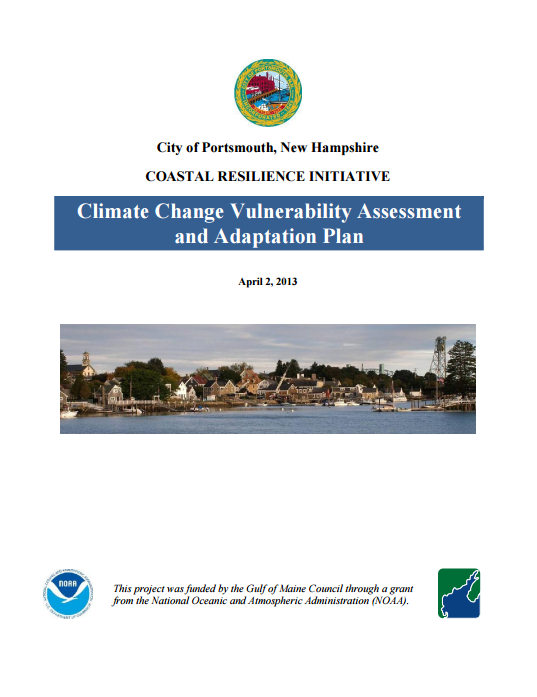 Research shows how the climate of New Hampshire and the Seacoast region has changed over the past century, and predicts that the future climate of the region will be affected by human activities that are warming the planet. The most current climate report for New Hampshire (Wake et al, 2011) describes historic trends over the past century and likely changes in New Hampshire’s climate over the next century and is designed to help residents and communities plan and prepare for changing climate conditions.1

Overall, New England has been getting warmer and wetter over the last century, and the rate of change has increased over the last four decades according to detailed analysis of data collected at four meteorological stations (Durham and Concord NH; Lawrence, MA; and Portland, ME).

The Coastal Resilience Initiative (CRI) is the City of Portsmouth’s first look at the potential impact from a changing climate. Coastal communities like Portsmouth are most vulnerable to impacts of sea level rise and coastal storm surge.

The objectives of the Coastal Resilience Initiative were to:

The study products include a set of flood elevation maps, a vulnerability assessment, a preliminary outline of potential adaptation strategies, and recommendations for future planning, regulation and policies. This report represents a starting point for the City to identify avenues to implement adaptation measures that impart resiliency in the built environmental and protect natural systems.

The purpose of this report is to provide a broad overview of spatial and temporal risk and vulnerability of public and private assets as a result of projected changes in climate. This report should be used for preliminary and general planning purposes only, not for parcel-level or site- specific analyses.

The best available predictive information about future climatic conditions specific to sea level rise were utilized in the preparation of this report which with LiDAR (Light Detection and Ranging) data collected by aircraft in 2011 serves as the primary source information for this project. That said, the vulnerability assessment performed for the project was limited by several factors including the vertical accuracy of elevation data (derived from LiDAR) and the static analysis applied to map coastal areas subject to future flooding which does not consider wave action and other coastal dynamics. Also, the estimated damages to buildings and infrastructure listed in Table 4 of the report are based upon the elevations of the land surrounding them, not the structure itself.

The modeled information in this report is based on the best understanding of the current and predicted future climate for this region. As model results and climate based projections are improved this report and reports of this type will need to be updated to reflect that new information, which could change the predicted amount of sea level rise and future climate impacts.