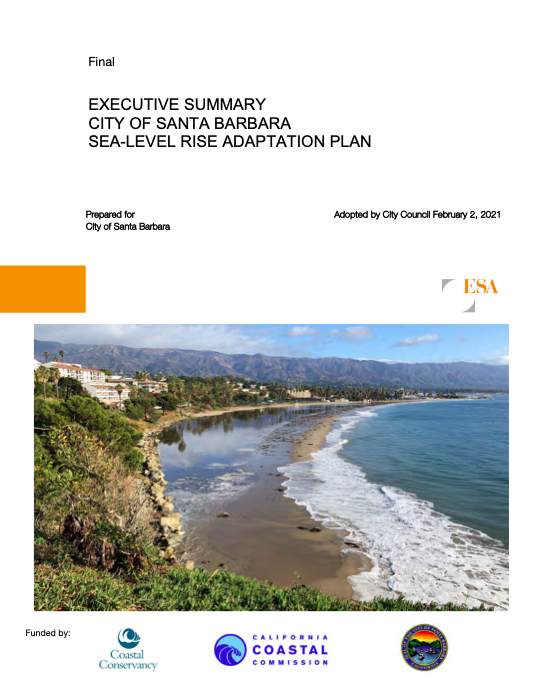 Preparation of a sea-level rise adaptation plan is identified as a priority in the Coastal Land Use Plan, Safety Element, and Hazard Mitigation Plan. Additionally, the State requires the City, as a trustee of state tidelands, to proactively plan for sea-level rise at the Harbor and Stearns Wharf and to consider sea-level rise as part of coastal development permitting. The 2019 Coastal Land Use Plan includes interim policies that begin to incorporate the effects of sea-level rise into coastal development permitting, but a more comprehensive plan for addressing sea-level rise was needed. The California Coastal Commission, therefore, partially funded the preparation of this Adaptation Plan as part of the City’s efforts to update its Local Coastal Program.

A vulnerability assessment was prepared for this Adaptation Plan to identify the areas of the city that, in the absence of intervention, are projected to be exposed to sea-level rise and related coastal hazards. This Adaptation Plan provides the framework for the City to monitor sea-level rise impacts and reduce vulnerabilities in phases as specific thresholds for action are reached. A wide range of adaptation options are presented, providing the City flexibility to consider different adaptation strategies over time.

The study area includes portions of the city that are projected to be impacted by coastal hazards through the year 2100, except the Santa Barbara Airport and Goleta Slough, which have been studied separately.

Information surrounding sea-level rise and how to adapt to it is quickly evolving. While the plan provides a framework for decision-making and further study in the mid- and long-term, specific recommendations are focused on the near-term (i.e., the next 10 years). Reevaluation of the plan is recommended to occur approximately every five to ten years as major updates occur to the State of California Sea-Level Rise Guidance or other substantive changes in best available information occur. This Adaptation Plan presents an initial framework for planning for sea-level rise that will continue to evolve over time as conditions change.

ESA is a 100% employee-owned environmental consulting firm. We plan, design, permit, mitigate, and restore—for projects across our communities, infrastructure systems, open spaces, and wildlands. We are 50 years strong in 21 offices across California, the Pacific Northwest, and the Southeastern United States.

Whether it’s improving your commute, keeping the lights on, providing access to clean water or transforming skylines, infrastructure powers possibilities to help people and communities thrive.