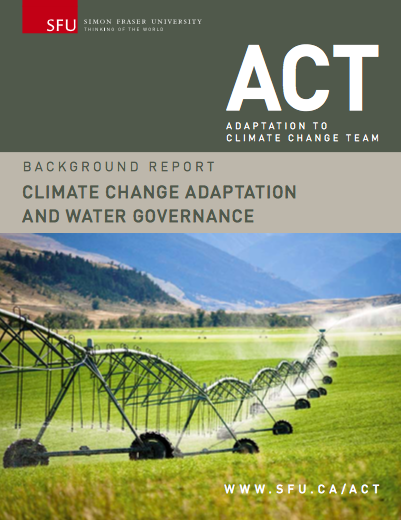 In most parts of Canada, climate change is increasingly affecting the way water moves through the hydrologic cycle, which up until now has fluctuated within a fixed envelope of certainty. This relatively stable regime is termed ‘stationarity’ by hydrologists. The hydro-climatic conditions that are emerging in response to climate change are increasingly outside this established range to which Canadians have demonstrated an ability to adapt over the last century.

Climate change is becoming a risk-multiplier that will test fundamental Canadian ideals related to the social contract that promises citizens peace, order and good government. The primary response to climate change in Canada thus far has focused principally on mitigating impacts by reducing greenhouse gas emissions. While such action is crucial, it is also inadequate by itself. Current and projected atmospheric concentrations of greenhouse gases are substantial enough to mean that further climate change will occur, and indeed is already occurring, regardless of our success in reducing emissions. Therefore, it is important to couple our efforts to mitigate the cause of the problem—in the case of climate change: greenhouse gas emissions—with efforts to adapt to the current and anticipated effects of climate change. As water is an essential resource in all aspects of life, social, economic and environmental, one of the most crucial ways to adapt to the growing number of negative consequences and costly feedbacks associated with climate change is to manage water effectively.

Because there is less confusion and debate in Canada about the importance of water than many other resources, the affirmation of a new “water ethic” could be a means of ultimately achieving greater adaptive capacity to climate change, while generating a great many other lasting social, economic and environmental benefits along the way. This, however, will require new governance structures that break down existing jurisdictional fragmentation and institutional territoriality. The breaking down and reformation of governance related to the management of water will, in itself, require a high degree of committed and effective collaboration among jurisdictions.