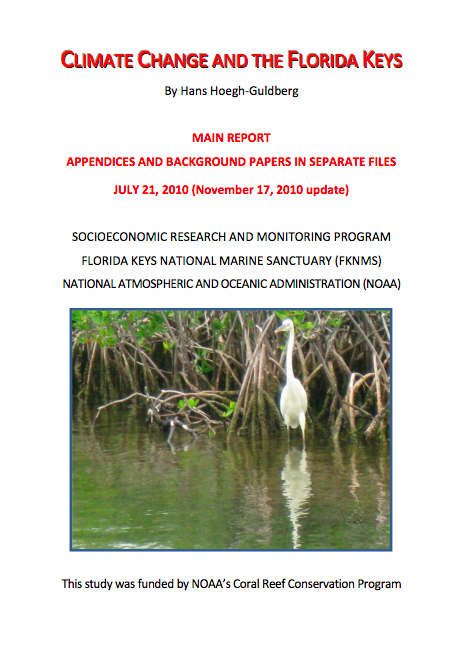 This research is part of the Socioeconomic Research and Monitoring Program for the Florida Keys National Marine Sanctuary (FKNMS), which was initiated in 1998.

The main report concerns the Florida Keys. It includes two appendices that identify key issues related to the future of the Keys over the 21st century. Four background papers deal with the global environment (Hoegh‐Guldberg 2010a,b,c,d). They are described first to put the Florida Keys into context.
The global environment: The threat of global climate change has grown over very few years from urgent to “red alert” according to the vast majority of climate scientists. Better climate models showing positive feedback have dramatized the evidence, but more importantly what were previously considered worst cases have moved closer to the center of the probability distribution. Global factors are therefore even more crucial than when this project was first planned in 2005.

This project - Climate Change and The Florida Keys - was modeled after a similar one conducted in the Great Barrier Reef, Australia. It identifies community perceptions on how to address mitigation and adaptation, and analyzes the likely socioeconomic and biophysical impacts of climate change on the region.