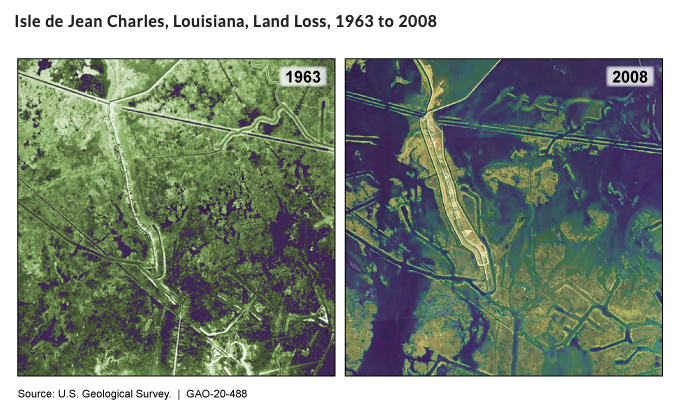 Sea level rise due to climate change threatens areas where millions of Americans live. In all but the lowest projections, retreat or relocation of communities from coastal areas will be unavoidable, according to the U.S. Global Change Research Program. One way to prepare is to preemptively move away from vulnerable areas. But few communities have considered such climate migration. There is some related federal funding, but it’s hard to use for climate migration because the programs are designed to address other priorities.

The U.S. Government Accountability Office (GAO) identified few communities in the United States that have considered climate migration as a resilience strategy, and two—Newtok, Alaska, and Isle de Jean Charles, Louisiana—that moved forward with relocation. Newtok, for example, faced imminent danger from shoreline erosion due to thawing permafrost and storm surge. Literature and experts suggest that many more communities will need to consider relocating in coming decades.

Federal programs provide limited support to climate migration efforts because they are designed to address other priorities, according to literature GAO reviewed and interviews with stakeholders and federal officials. Federal programs generally are not designed to address the scale and complexity of community relocation and generally fund acquisition of properties at high risk of damage from disasters in response to a specific event such as a hurricane. Unclear federal leadership is the key challenge to climate migration as a resilience strategy. Because no federal agency has the authority to lead federal assistance for climate migration, support for climate migration efforts has been provided on an ad hoc basis. For example, it has taken over 30 years to begin relocating Newtok and more than 20 years for Isle de Jean Charles, in part because no federal entity has the authority to coordinate assistance, according to stakeholders in Alaska and Louisiana. These and other communities will rely on post-disaster assistance if no action is taken beforehand—this increases federal fiscal exposure. Risk management best practices and GAO's 2019 Disaster Resilience Framework suggest that federal agencies should manage such risks before a disaster hits. A well-designed climate migration pilot program that is based on project management best practices could improve federal institutional capability. For example, the interagency National Mitigation Investment Strategy—the national strategy to improve resilience to disasters—recommends that federal agencies use pilot programs to demonstrate the value of resilience projects. As GAO reported in October 2019, a strategic and iterative risk-informed approach for identifying and prioritizing climate resilience projects could help target federal resources to the nation's most significant climate risks. A climate migration pilot program could be a key part of this approach, enhancing the nation's climate resilience and reducing federal fiscal exposure.

Why GAO Did This Study

According to the 13-agency United States Global Change Research Program, relocation due to climate change will be unavoidable in some coastal areas in all but the very lowest sea-level rise projections. One way to reduce the risks to these communities is to improve their climate resilience by planning and preparing for potential hazards related to climate change such as sea-level rise. Climate migration—the preemptive movement of people and property away from areas experiencing severe impacts—is one way to improve climate resilience.

Our Mission is to support the Congress in meeting its constitutional responsibilities and to help improve the performance and ensure the accountability of the federal government for the benefit of the American people. We provide Congress with timely information that is objective, fact-based, nonpartisan, nonideological, fair, and balanced.