Climate Change in Colorado: A Synthesis to Support Water Resources Management and Adaptation: A Report for the Colorado Water Conservation Board 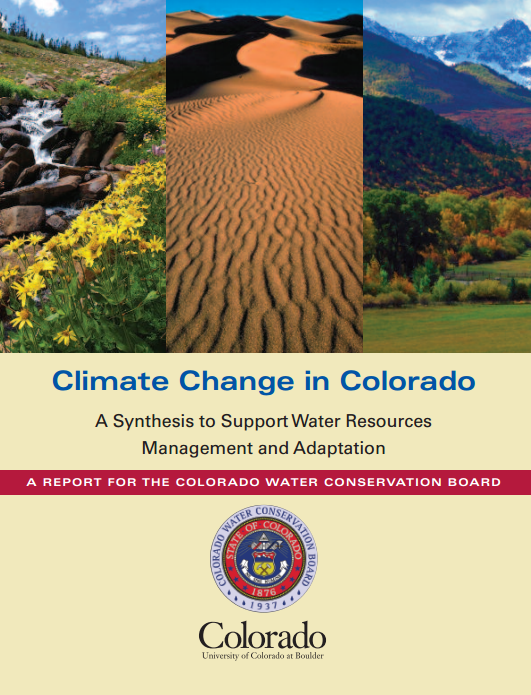 The scientific evidence is clear: the Earth’s climate is warming. Multiple independent measurements confirm widespread warming in the western United States; in Colorado, temperatures have increased by approximately 2°F between 1977 and 2006. Increasing temperatures are affecting the state’s water resources. (Sections 1, 2, 4, 5, 6)

This report is a synthesis of climate change science important for Colorado’s water supply. It focuses on observed trends, modeling, and projections of temperature, precipitation,snowmelt, and runoff. Climate projections are reported out to the mid-21st century, because this is a relevant time frame for development of adaptation strategies.

Although many published studies and datasets include information about Colorado, few climate studies focus only on the state. Consequently, many important scientific analyses for Colorado are lacking. This report summarizes Coloradospecific findings from peer-reviewed regional studies, and presents new graphics derived from existing datasets. The state is home to many experts in climate and hydrology, and this report also draws from ongoing work by these scientists.