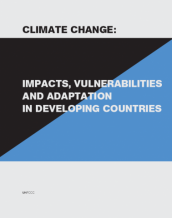 The book draws heavily on information provided by Parties to the UNFCCC, particularly that provided at three regional workshops held in Africa, Asia and Latin America and one expert meeting held in small island developing States during 2006 – 20071, as mandated by the Buenos Aires programme of work on adaptation and response measures (decision 1/CP.10 of the Conference of the Parties to the UNFCCC)2, as well as information in national communications3 and national adaptation programmes of action4 submitted to the UNFCCC, reports from the Intergovernmental Panel on Climate Change (IPCC 2007) and other sources, as referenced.