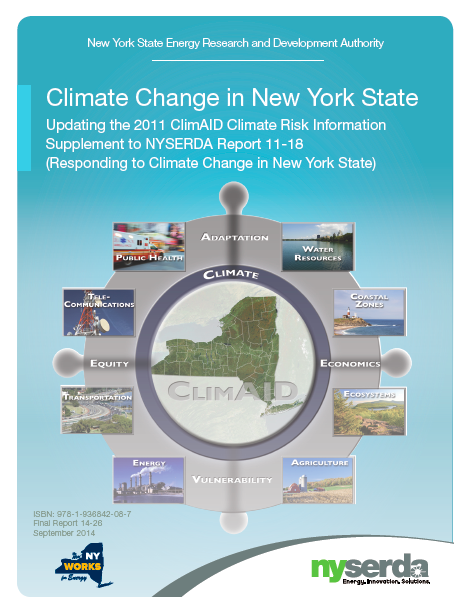 As with the original ClimAID assessment, New York State was divided into seven regions for this update. The geographic regions are grouped together based on a variety of factors, including type of climate and ecosystems, watersheds, and dominant types of agricultural and economic activities. The broad geographical regions are: Western New York and the Great Lakes Plain (Region 1), Catskill Mountains and the West Hudson River Valley (Region 2), the Southern Tier (Region 3), the coastal plain composed of the New York City metropolitan area and Long Island (Region 4), the East Hudson and Mohawk River Valleys (Region 5), the Tug Hill Plateau (Region 6), and the Adirondack Mountains (Region 7).

Global climate model-based quantitative projections are provided within each region for:

The potential for changes in other variables is also described, although in a more qualitative manner because quantitative information for them is either unavailable or considered less reliable. These variables include:

New York State Energy Research and Development Authority (NYSERDA) is a public benefit corporation created in 1975 under Article 8, Title 9 of the State Public Authorities Law through the reconstitution of the New York State Atomic and Space Development Authority. NYSERDA’s earliest efforts focused solely on research and development with the goal of reducing the State’s petroleum consumption. Today, NYSERDA’s aim is to help New York meet its energy goals: reducing energy consumption, promoting the use of renewable energy sources, and protecting the environment.