Climate Change & Social Vulnerability in the United States: A Focus on Six Impacts 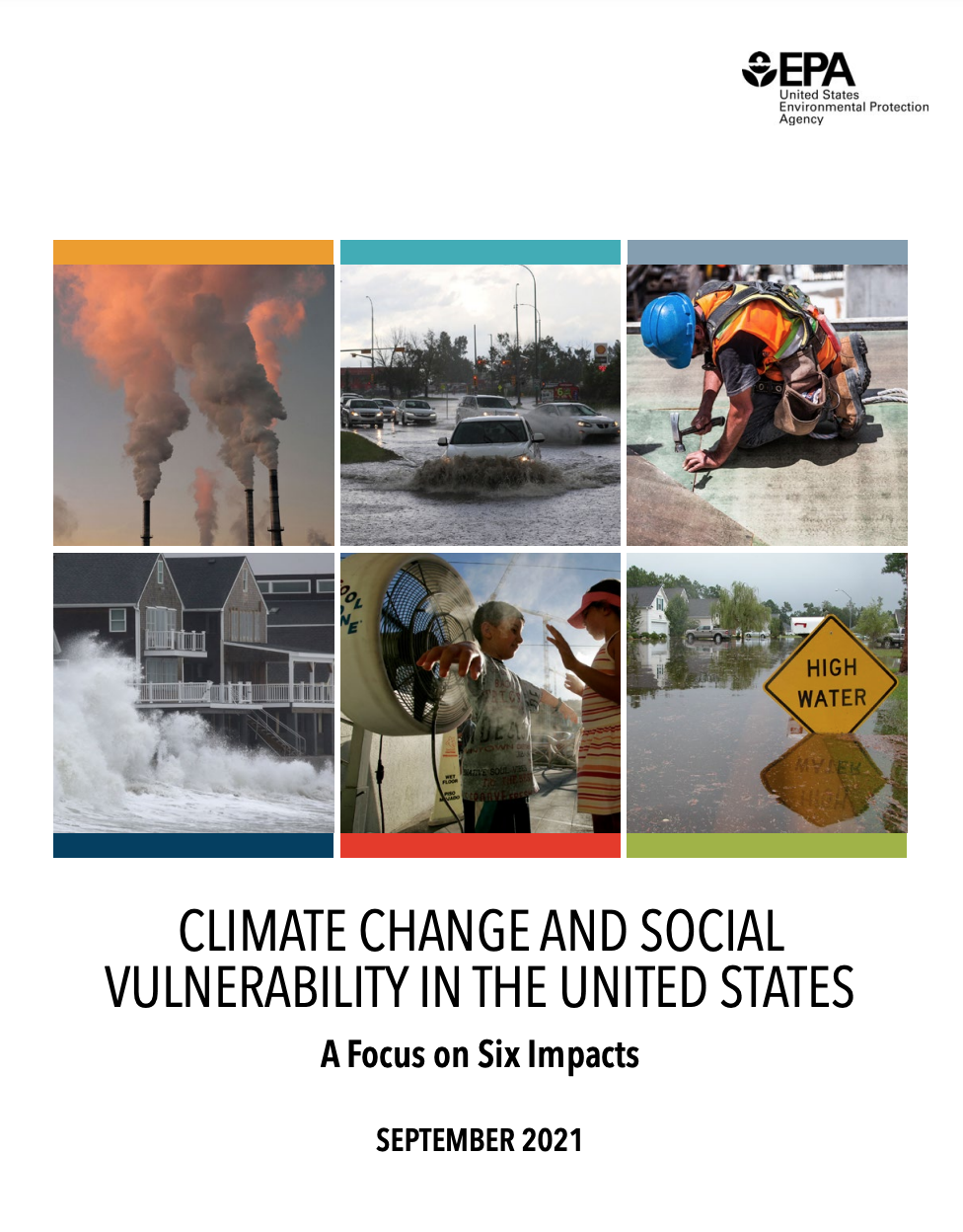 Climate change affects all Americans—regardless of socioeconomic status—and many impacts are projected to worsen as temperatures and sea levels continue to rise, snow and rainfall patterns shift, and some extreme weather events become more common.

A growing body of literature focuses on the disproportionate and unequal risks that climate change is projected to have on communities that are least able to anticipate, cope with, and recover from adverse impacts. Many studies have discussed climate change impacts on socially vulnerable populations, but few have quantified disproportionate risks to socially vulnerable groups across multiple impacts and levels of global warming.

This report contributes to a better understanding of the degree to which four socially vulnerable populations—defined based on income, educational attainment, race and ethnicity, and age—may be more exposed to the highest impacts of climate change in six categories:

Specifically, the analyses presented in this report first identify the areas in the contiguous United States (U.S.) where impacts are projected to be the highest under future global temperature change and sea level rise. For example, the Extreme Temperature and Labor analysis estimates where weather-exposed workers are projected to lose the most labor hours due to high-temperature days, and the Coastal Flooding and Property analysis estimates where the highest percentage of property is projected to be inundated due to sea level rise. Next, the analyses estimate the likelihood that those who are socially vulnerable live in these areas compared to those who are not. This determination is based on current demographic distributions and projected changes in climate hazards under different levels of global warming and sea level rise. The result is a consistent measure of the disproportionate risk to socially vulnerable individuals, which can be compared across groups, regions, and impact categories.

Due to data limitations, the analyses are limited to the contiguous U.S. Future work will enhance both the coverage of important areas such as Hawai’i and Alaska, and will explore additional impacts. Furthermore, additional dimensions of social vulnerability (e.g., gender and linguistic isolation) are not included and warrant additional analysis.

The Earth’s changing climate is affecting human health and the environment in many ways. Across the U.S., temperatures and sea levels are rising, snow and rainfall patterns are shifting, and some extreme weather events are becoming more common. Many climate change impacts are expected to increase in both magnitude and frequency over the coming decades, with risks to human health, the economy, and the environment.

According to the Fourth National Climate Assessment (NCA4), the impacts of climate change will not be equally distributed across the U.S. population. Those who are already vulnerable due to a range of social, economic, historical and political factors have a lower capacity to prepare for, cope with, and recover from climate change impacts. Understanding the comparative risks to vulnerable populations is critical for developing effective and equitable strategies for responding to climate change.

A growing body of literature focuses on the impacts of climate change on socially vulnerable populations, but few studies have quantified disproportionate risks across multiple impacts and levels of global warming.5,6 This report contributes to a better understanding of the degree to which socially vulnerable populations may be more exposed to the highest impacts of climate change in six categories: Air Quality and Health; Extreme Temperature and Health; Extreme Temperature and Labor; Coastal Flooding and Traffic; Coastal Flooding and Property; and Inland Flooding and Property.

Differential exposure to climate hazards can take many forms; for example, some may be more exposed to hazards due to their occupation or where they work. This report uses current data on where people live as an indicator of exposure, recognizing that demographic patterns may change in the future. Similarly, differential vulnerability can result from a wide range of social, economic, and political factors that make some populations less able to anticipate, respond to, recover from, and adapt to climate hazards.

This report focuses on four categories of social vulnerability for which there is evidence that differential vulnerability exists. These groups are based on income, educational attainment, race and ethnicity, and age.

Consistent with the conceptual framework, the analyses in this report estimate comparative risks to socially vulnerable groups by first identifying where impacts from climate hazards are projected to be highest and then estimating the likelihood that those who are socially vulnerable live in these areas compared to those who are not. This determination is based on current demographic distributions and projected changes in climate hazards under future levels of warming and sea level rise.