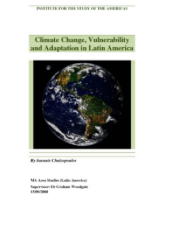 It is now widely agreed that we are facing a climate change with the main features being global warming and the universal deterioration of natural habitats and livelihoods. These side-effects also extend to sea-level rise, change of weather, decrease on the freshwater supplies, impacts on farming and health. Latin America plays a key role itself. We only have to think about the Amazon tropical forest, its biodiversity but at the same time the deforestation that takes place and the fact that 35 percent of the worlds freshwater is found in the region. Furthermore, the impacts on the people’s livelihoods are substantial, considering for example that 30-40 percent of the working population is employed in farming and bearing in mind the fact that Latin America is a continent with a high degree of poverty and therefore vulnerability. At the same time, there are various efforts towards adaptation taking place, focusing mainly on alternative sources of energy such as for example the use of bio-fuels in Brazil and the micro-hydro system in Peru. The aim of this dissertation is to present, discuss and analyze climate change and the issues of vulnerability and adaptation in the Latin American region.