Climate Variability and Change and Sea level Rise in the Pacific Islands Region: A Resource Book for Policy and Decision Makers, Educators and other Stakeholders 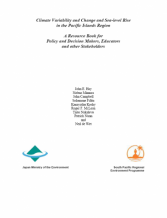 In recent years, global warming has come to the fore as one of the world’s most serious environmental problems. Meanwhile, over the past ten years, international negotiations and the accumulation of scientific knowledge in this field have led to remarkable progress — such as the adoption and entry into force of the UN Framework Convention on Climate Change, the adoption of the Kyoto Protocol, and the release of the Third Assessment Report of the Intergovernmental Panel on Climate Change. With regard to the Kyoto Protocol, which sets forth the commitments of developed countries for reductions of greenhouse gas emissions, Japan completed its ratification procedures in June 2002, and is also working with other countries to make the Protocol’s entry into force a reality.

Pacific Island Countries are in one of the most vulnerable regions of the world. Here, international assistance is especially needed in order to carry out the appropriate adaptation strategies for global warming. For this reason, the South Pacific Regional Environment Programme (SPREP) and Ministry of the Environment of Japan have implemented a variety of initiatives in cooperation with a number of the countries in this region, from the perspective of promoting implementation of adaptation measures by these countries. Vulnerability assessments of coastal zones and the feasibility of adaptation measures were the subject of studies conducted during 1992 to 1995 in a number of Pacific Island States (Tonga, Fiji, Western Samoa and Tuvalu), in collaboration with SPREP and the University of the South Pacific (USP).

This Resource Book was prepared based on the “Assessment of Possible Climate Change and Sea-level Rise Activities to be Undertaken in Pacific Island Countries in Cooperation with Japan” which was conducted in 1999 and 2000, through cooperation between SPREP and the Ministry of the Environment. The Resource Book is designed to be used widely as a tool for awareness-raising, being a summary of the latest knowledge about climate change as it relates to the Pacific Islands Region. A compilation of the latest literature, scientific knowledge and data, with frequent use of diagrams and tables, it is designed to be readily understood by readers with a variety of viewpoints and backgrounds, such as policy-makers, educators and research coordinators.