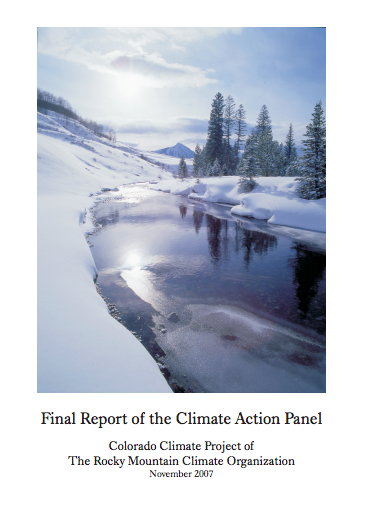 The Rocky Mountain Climate Organization (RMCO) undertook the Colorado Climate Project to bring Coloradans together to reduce the state’s contribution and vulnerability to climate change. The project was inspired by and patterned after similar efforts undertaken by state governments around the country. Like many of those efforts, the Colorado Climate Project was carried out in partnership with the Center for Climate Strategies (CCS), which helped design the process and provided technical analyses for and facilitation services for this project, as CCS has done for state government advisory panels in several states.

RMCO’s Project Directors of the Colorado Climate Project appointed a blue-ribbon Climate Action Panel (CAP) and charged them to develop recommendations for actions that can be taken in Colorado by the state government, local governments, water providers, the private sector, and individuals to reduce the state’s contribution and vulnerability to a changed climate. This report is the culmination of the work of 116 Coloradans who worked as members of and alternates to the CAP and the six Policy Work Groups (PWGs) that supported the CAP.

In January 2007, CCS prepared a preliminary draft greenhouse gas (GHG) emissions inventory and reference case projection for the Colorado Department of Public Health and Environment (CDPHE) that was separately provided to the CAP and its PWGs to assist them in understanding past, current, and possible future GHG emissions in Colorado, and thereby inform the policy development process. The preliminary draft Inventory and Projections was improved by incorporating comments provided by the CAP and PWGs. As shown in Figure ES-1, the Inventory and Projections revealed substantial emissions growth rates and related mitigation challenges. Colorado’s gross emissions of GHGs grew by 35% between 1990 and 2005, slightly more than twice the national average of 16%. Colorado’s emissions growth was driven largely by the growth of Colorado’s population, as the state’s emissions on a per-capita basis stayed essentially constant between 1990 and 2005. Under current law, Colorado’s gross GHG emissions (not counting sequestration) are projected as rising fairly steeply to 147.5 million metric tons (MMt) of carbon dioxide equivalent (CO2e) by 2020, or 71% over 1990 levels.