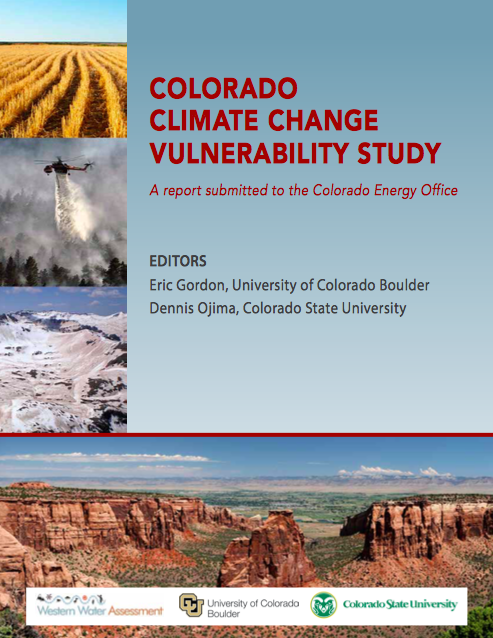 Colorado’s climate has warmed in recent decades, and climate models unanimously project this warming trend will continue into the future. Climate change has and will continue to impact the state’s resources in a variety of ways, including more rapid snowmelt, longer and more severe droughts, and longer growing seasons. Moreover, Colorado experiences numerous climate- related disasters, such as oods, droughts, and wild res, which will continue to occur in the future and pose serious hazards to public safety and the economy, regardless of the rate at which the climate warms.

During its 2013 session, the Colorado Legislature passed HB13-1293, which declared that “climate change presents serious, diverse, and ongoing issues for the state’s people, economy, and environment.” Among other provisions, the bill required the governor to submit an annual report to a number of commi ees within the legislature “on climate change issues generally, the current climate action plan...and the speci c ways in which climate change a ects the state.”

The Colorado Energy Office commissioned the University of Colorado Boulder and Colorado State University to assemble a team of Colorado- based experts to complete this study, as one initial step in a multi-agency response to the requirements of HB 13-1293. The Colorado Climate Change Vulnerability Study provides an overview of key vulnerabilities that climate variability and change will pose for Colorado’s economy and resources. The purpose of the study is to provide state agencies, local governments, and others with background for preparedness planning.