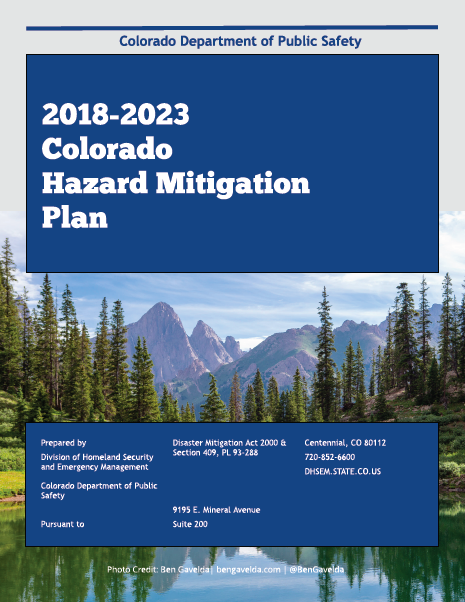 Hazard mitigation helps to reduce or eliminate potential losses from future disasters. Hazard mitigation planning helps to establish and maintain a process that leads to the implementation of hazard mitigation actions. The State of Colorado is intimately familiar with the impacts of hazards on its residents, visitors, infrastructure, and economy. This 2018 update to the State’s Hazard Mitigation Plan (State Plan) again re-affirms the state’s commitment to continual improvements to its statewide mitigation strategy and program.

The hazard mitigation planning process began with the identification of a broad-reaching State Hazard Mitigation Team (SHMT), which helped to guide the development of the State Plan. The next steps involved a detailed identification of all natural, technological, and human-caused hazards that can impact Colorado and an assessment of the vulnerability, and ultimately the risk, presented by those hazards. The next stage included a thorough evaluation of the state’s current mitigation capabilities, followed by an update to the state’s mitigation strategy. This strategy identified eight overarching Mitigation Goals, and related Mitigation Objectives, that define Colorado’s path forward to implementing haza rd mitigation.

These goals helped the SHMT to identify new and on-going mitigation actions that specific state agencies plan to implement over the next five years. The final and most important piece of the State Plan is defining the path forward. Through the planning process a clear process for implementation and maintenance has been defined.