Comparing Urban and Rural Vulnerability to Heat-Related Mortality: A Systematic Review and Meta-analysis 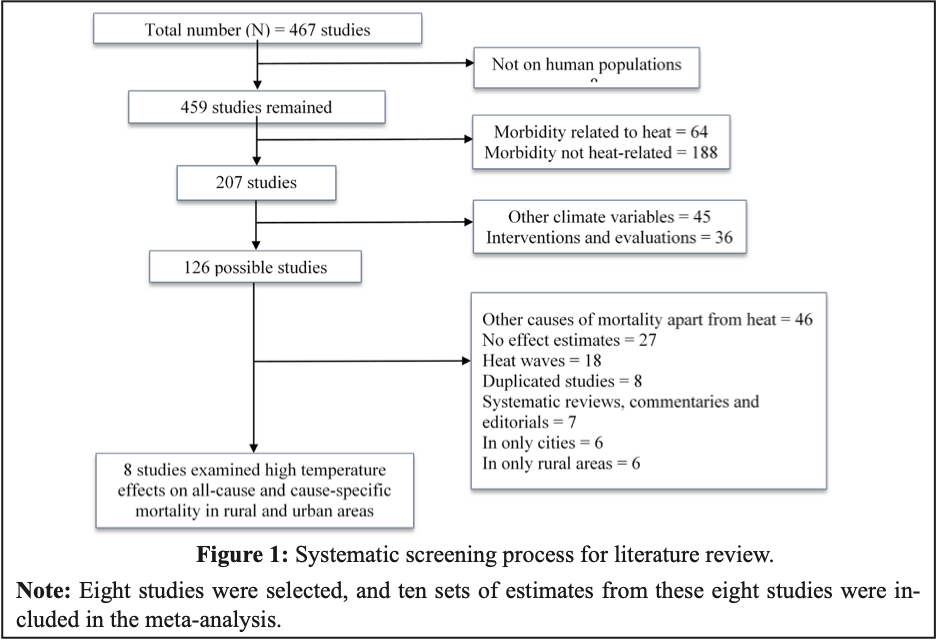 Studies of the adverse impacts of high temperature on human health have primarily focused on urban areas, due in part to urban centers generally having higher population density and often being warmer than surrounding rural areas (the “urban heat island” effect). As a result, urban areas are often considered to be more vulnerable to summer heat. However, heat vulnerability may not only be determined by heat exposure, but also by other population characteristics such as age, education, income, baseline health status, and social isolation. These factors are likely to increase vulnerability among rural populations compared to urban populations. In this exploratory study, we compare the vulnerability to heat-related mortality between rural and urban communities through a systematic review and meta-analysis of existing epidemiological studies, based on the idea that urbanicity can be considered as a “combined” indicator of climate variables and socioeconomic variables. We searched studies that examined the association between high ambient temperature and mortality in both rural and urban settings published between 2000 and 2017. A random-effects meta-analysis of Ratios of Relative Risks (RRR) of heat-related mortality in rural compared to urban areas (RRrural/RRurban) was performed. The pooled RRR was 1.033 (95% CI = 0.969, 1.103), which indicates that the rural relative risk is about 3.3% larger than the urban relative risk. Heterogeneity measures show considerable heterogeneity across studies. Our findings suggest that vulnerability to heat-related mortality in rural areas is likely to be similar to or even greater than urban areas. More studies, particularly studies in developing nations, are needed to understand rural vulnerability to heat hazards as a basis for providing better guidance for heat action plans.