Conserving California’s Coastal Habitats: A Legacy and a Future with Sea Level Rise 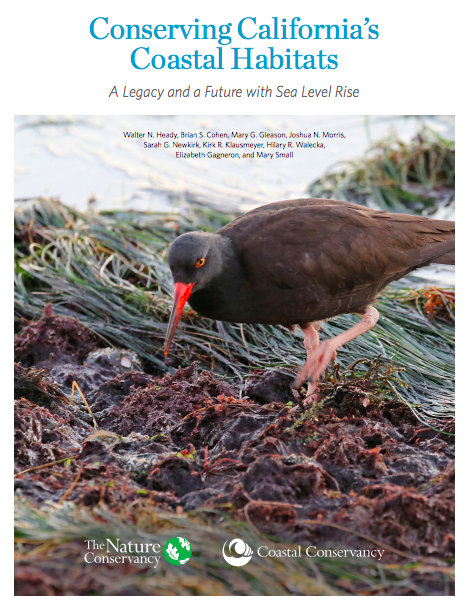 To inform current and future adaptation decisions and conservation actions we conducted the first statewide, comprehensive assessment of the vulnerability of California’s coastal habitats, imperiled species, and conservation lands to sea level rise. Coastal habitats exist in narrow bands at the land-sea interface and are therefore extremely susceptible to inundation by sea level rise. However, some habitats may be able to adapt vertically and possibly move inland, assuming local topography and the built environment do not constrain this movement. We assessed the vulnerability of 40 habitats to sea level rise by quantifying the sensitivity and spatial extent of projected exposure of each habitat patch to intertidal and subtidal waters, relative to its ability to move inland in response to rising sea levels.

Results of this spatially explicit assessment show that five feet of sea level rise will have dramatic impacts on coastal habitats, biodiversity, and protected lands along California’s coast. The study found that as much as 25% of the existing public conservation lands within the analytic zone will be lost to subtidal waters. Eight imperiled species—including coastal dunes milk-vetch, California seablite, and California Ridgway’s rail—only occur in areas that are projected to be inundated with a projected five feet of sea level rise. At least half of the documented haul-outs for Pacific harbor seals and Northern elephant seals, and nesting habitats for focal shorebirds like black oystercatchers, are also highly vulnerable.