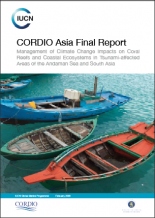 The tsunami of 26 December 2004 had a major impact on countries around the Indian Ocean. In many areas the devastation was extreme, but overall the effects on on human settlements, infrastructure as well as ecosystems were patchy. In many ways it highlighted and exacerbated existing problems, such as coral reef degradation due to climate change driven coral bleaching and over fishing, and associated loss of livelihoods. Evidence quickly emerged that indicated more severe impacts from the tsunami in areas that had seen more severe degradation of natural ecosystems and resources, as well as in societies under strain. The project “Management of Climate Change Impacts on Coral Reefs and Coastal Ecosystems in Tsunami affected Areas of the Andaman Sea and South Asia” was developed by IUCN’s Global Marine Programme and supported by the Ministry for Foreign Affairs of Finland through a grant to IUCN. Taking a holisticapproach to addressing tsunami impacts in the context of preexisting processes and trends, the project worked towards three objectives: (i) to improve the management of coastal ecosystems such as coral reefs, mangroves and other key environments, specifically in relation to the impacts of climate change; (ii) to develop alternative livelihood projects for families in coastal areas that no longer can support themselves due to the deterioration of the coastal environment; and (iii) to improve the education and awareness of the impacts of human activities on coastal ecosystems and strengthen the capacity of local resource users and managers to mitigate those impacts.