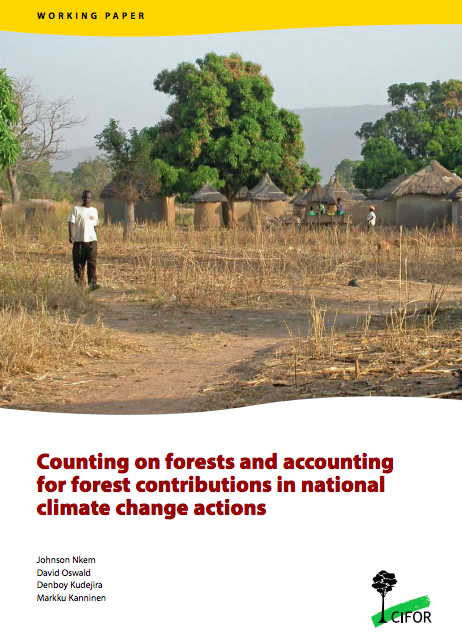 In addition, the outline for the second national communication to the UNFCCC was reviewed on how forest information could be used to address and overcome some of the gaps identified in the first national communications. As a case study, similar analysis on the use of forest was conducted on the National Adaptation Programme of Action (NAPA) for Burkina Faso.

Although forest is a common theme, there are distinct similarities and differences in the role of forest in the seven countries. In all the countries, forests play an important role in national inventories of greenhouse gases by absorbing carbon dioxide throughout the growth stages. Additionally, forests are globally important as regulating mechanisms in the hydrological cycle. Regional similarities are evident in central American countries in the roles forests play in contributing to hydroelectric activity and in regulating the supply of potable water. There are distinct regional differences between central America, Indonesia and west Africa in both the climate risks and the use of forest. west African countries, for example, are less vulnerable to storms and the resulting deluge-induced inland floods experienced in central America and Indonesia. Land stability as a function of forest management is therefore emphasised in central America and Indonesia. The main message is that forest is important to all seven countries for climate change adaptation. However, each country has unique forms of vulnerability that shape its use of forest goods and services. Thus, the unique context of each country must be considered when formulating climate-change adaptation policies. The analysis of the NAPA in Burkina Faso highlights the significant and diverse roles that forests play in climate change adaptation. The majority of the NAPA priority projects identified in Burkina Faso are forest based. Thus, forest constitutes an important entry point for NAPA implementation, and success will require measures that enhance forest adaptive capacity. Overall, the full potentials of the use of forest are not strongly emphasised in the national documents on climate change.

An overall conclusion is that climate change adaptation in tropical countries requires substantial information on forests, which must be timely and accurate, and that needs to be integrated into an adaptive management policy framework.

The Center for International Forestry Research is a nonprofit, global facility dedicated to advancing human wellbeing, environmental conservation and equity. We conduct research that enables more informed and equitable decision making about the use and management of forests in less-developed countries.Our research and expert analysis help policy makers and practitioners shape effective policy, improve the management of tropical forests and address the needs and perspectives of people who depend on forests for their livelihoods.