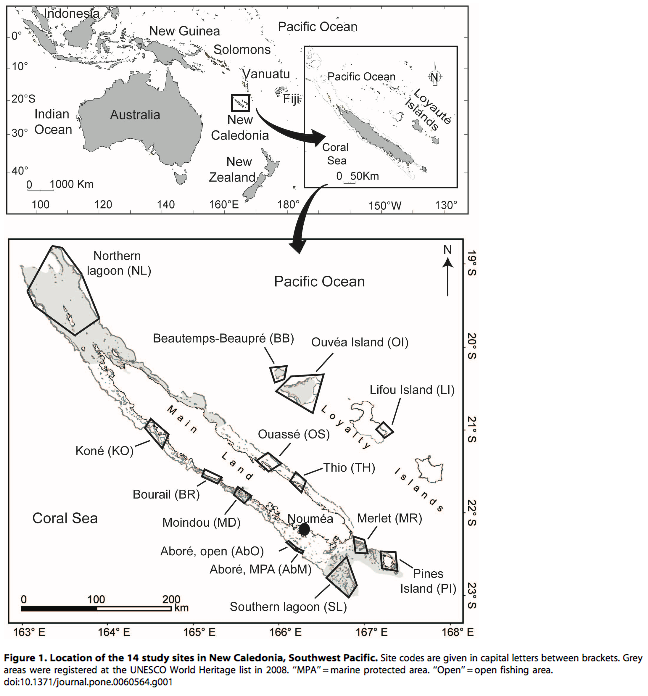 Parts of coral reefs from New Caledonia (South Pacific) were registered at the UNESCO World Heritage list in 2008. Management strategies aiming at preserving the exceptional ecological value of these reefs in the context of climate change are currently being considered. This study evaluates the appropriateness of an exclusive fishing ban of herbivorous fish as a strategy to enhance coral reef resilience to hurricanes and bleaching in the UNESCO-registered areas of New Caledonia. A two-phase approach was developed: 1) coral, macroalgal, and herbivorous fish communities were examined in four biotopes from 14 reefs submitted to different fishing pressures in New Caledonia, and 2) results from these analyses were challenged in the context of a global synthesis of the relationship between herbivorous fish protection, coral recovery and relative macroalgal development after hurricanes and bleaching. Analyses of New Caledonia data indicated that 1) current fishing pressure only slightly affected herbivorous fish communities in the country, and 2) coral and macroalgal covers remained unrelated, and macroalgal cover was not related to the biomass, density or diversity of macroalgae feeders, whatever the biotope or level of fishing pressure considered. At a global scale, we found no relationship between reef protection status, coral recovery and relative macroalgal development after major climatic events. These results suggest that an exclusive protection of herbivorous fish in New Caledonia is unlikely to improve coral reef resilience to large-scale climatic disturbances, especially in the lightly fished UNESCO-registered areas. More efforts towards the survey and regulation of major chronic stress factors such as mining are rather recommended. In the most heavily fished areas of the country, carnivorous fish and large targeted herbivores may however be monitored as part of a precautionary approach.