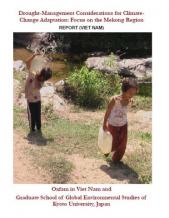 During recent years, drought has become a common occurrence in most areas in the Mekong River Delta of the Mekong region, including nine provinces in the Southern Central and Central Highland regions in Viet Nam. The Department of Water Resources, Ministry of Agriculture and Rural Development (MARD), has estimated that between 1 and 1.3 million people (13–17 per cent of the total population) are affected by drought in these provinces and hence are in need of assistance. Ninh Thuan province is the worst affected of these provinces.
This project is part of a collaboration between the International Environment and Disaster Management (IEDM) laboratory of the Graduate School of Global Environmental Studies, Kyoto University, Japan, the People’s Committee of Ninh Thuan, Viet Nam, and Oxfam in Viet Nam. The current research focuses on the impacts of recurring droughts on the livelihoods of the rural communities in the drought-prone areas of Ninh Thuan province. The study also examines the perceptions of local communities and government functionaries on the question of the extent to which drought-related vulnerabilities can be traced to climate change at the global level.
We assessed the drought vulnerability of the rural communities in the most drought-prone areas in Ninh Thuan province by identifying drought impacts on a range of livelihood sectors such as agriculture, animal husbandry, and fisheries. The impacts were ranked, and root causes were identified, on the basis of which appropriate policy interventions are suggested. Wherever possible, attempts were made to identify gender-disaggregated impacts and adaptation measures. At the end, a note has been provided on future directions for various potential stakeholders, in order to take forward the findings of the study.

The study revealed that rainfall in Ninh Thuan province has actually been increasing for some time. However, there are indications of increasing inter-annual variability, as evidenced by increasing deviation from the long-term mean. This could be the main reason for the increasing incidence of drought, rather than any decline in long-term rainfall. Another reason for increasing drought conditions is increasing demand for water. The province has witnessed a steady growth in the area under wet paddy cultivation and the production of maize and other perennial crops which need substantial inputs of water, compared with the dry rice grown in earlier years. Heavy reliance on groundwater has led to significant saline-water intrusion. The proliferation of aquaculture in many areas of the province has further contributed to the problems of drought.
The survey found that communities were well aware of climate changes happening around them, notably higher temperatures and erratic rainfall. They attributed the drought not only to decline in forest cover in the province, but also to the poor environment-management practices elsewhere. Communities were of the opinion that the provision of better financial facilities and initiatives to diversify their livelihoods would substantially reduce their vulnerability to climate-related extremes. Discussions with government and non-government officials have corroborated these findings.
Policy options identified in participatory consultation exercises with communities consist of better water-use management strategies, both at the field level and at the basin/command level, and introduction of better crop-management practices, including enhanced irrigation efficiency and introduction of drought-resistant crop varieties that use less water while not compromising the yield. The National Forum has recommended establishing dedicated Drought Management Boards at commune level on the lines of the flood-management boards, which have been successful. Such boards would not only enhance the response and relief operations but would also help to identify and implement appropriate drought-mitigation programmes by assessing local vulnerabilities.