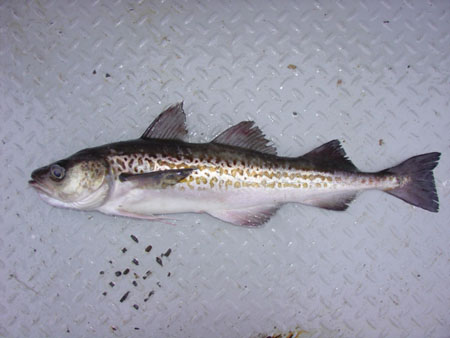 This image is in the public domain because it contains materials that originally came from the U.S. National Oceanic and Atmospheric Administration, taken or made as part of an employee's official duties.

A statistical model is developed to link recruitment of eastern Bering Sea walleye pollock (Theragra chalcogramma) to variability in late summer sea surface temperatures and to the biomass of major predators. The model is based on recent advances in the understanding of pollock recruitment, which suggest that warm spring conditions enhance the survival of early larvae, but high temperatures in late summer and autumn are associated with poor feeding conditions for young-of-year pollock and reduced recruitment in the following year. A statistical downscaling approach is used to generate an ensemble of late summer temperature forecasts through 2050, based on a range of IPCC climate projections. These forecasts are used to simulate future recruitment within an age-structured stock projection model that accounts for density-dependent effects (stock–recruitment relationship), the estimated effects of temperature and predation, and associated uncertainties. On average, recruitment in 2040–2050 should expectedly decline by 32–58% relative to a random recruitment scenario, depending on assumptions about the temperature relationship, the magnitude of density-dependence, and future changes in predator biomass. The approach illustrated here can be used to evaluate the performance of different management strategies and provide long-term strategic advice to managers confronted with a rapidly changing climate.