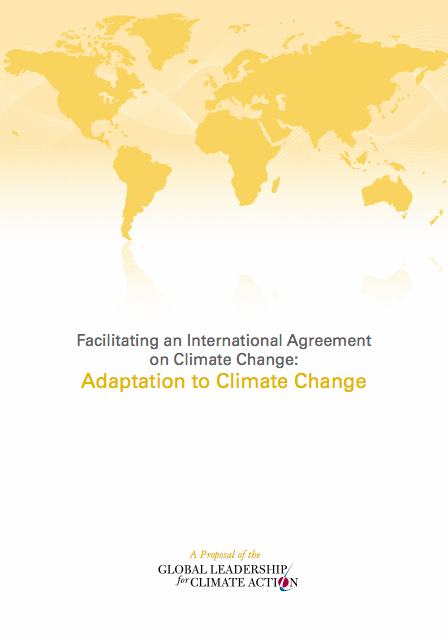 A joint initiative of the United Nations Foundation and the Club of Madrid, Global Leadership for Climate Action (GLCA) consists of former heads of state and government, as well as leaders in business, government, and civil society from more than 20 countries. In 2007, GLCA published Framework for a Post-2012 Agreement on Climate Change, which called for four negotiating pathways focused on mitigation, adaptation, technology, and finance. This paper focuses more specifically on adaptation and its links to development and poverty alleviation, with emphasis on action at the local level.

Climate change will have significant impacts on development, poverty alleviation, and the achievement of the Millennium Development Goals (MDGs). Hard-fought progress made in achieving these global goals may be slowed or even reversed by climate change as new threats emerge to water and food security, agricultural production, nutrition, and public health. Countries and regions that fail to adapt will contribute to global insecurity through the spread of disease, conflicts over resources, and a degradation of the economic system.

Given the far-ranging adverse impacts of climate change, adaptation must be an integral component of an effective strategy to address climate change, along with mitigation. The two are intricately linked—the more we mitigate, the less we have to adapt. However, even if substantial efforts are undertaken to reduce further greenhouse gas emissions, some degree of climate change is unavoidable and will lead to adverse impacts, some of which are already being felt. The world’s poor, who have contributed the least to greenhouse gas emissions, will suffer the worst impacts of climate change and have the least capacity to adapt. Elementary principles of justice demand that the world’s response strategies and adaptation funds give special priority to the poorest countries.