The California Department of Transportation (Caltrans) road system is important for access, particularly in northern California where impacts to highways and limited availability of alternate routes have isolated populations during past extreme weather events. Caltrans District 1, in cooperation with the Humboldt County Association of Governments, assessed criticality of assets and potential impact to screen for vulnerability. The vulnerability assessment approach drew from methodologies developed by FHWA and the Washington State DOT 2010-2011 climate resilience pilot project. The pilot team then conducted an analysis of adaptation options at four prototype locations. The team gathered input from Caltrans maintenance staff, project partners, and the public throughout the project.

The vulnerability assessment covered the entire Caltrans District 1, which consists of the counties of Del Norte, Humboldt, Mendocino, and Lake. The project inventoried and analyzed over 16,000 Caltrans assets within the study area, including storm drains, culverts, bridges, buildings, and other assets. The vulnerability assessment focused on primary climate change effects including temperature, precipitation, and sea level rise, and projected the potential impacts of secondary effects such as erosion, flooding, and landslides.

The adaptation phase of work studied resilience to the secondary climate impacts to road segments in four prototype locations.

The mission of the Department is to serve the United States by ensuring a fast, safe, efficient, accessible and convenient transportation system that meets our vital national interests and enhances the quality of life of the American people, today and into the future. 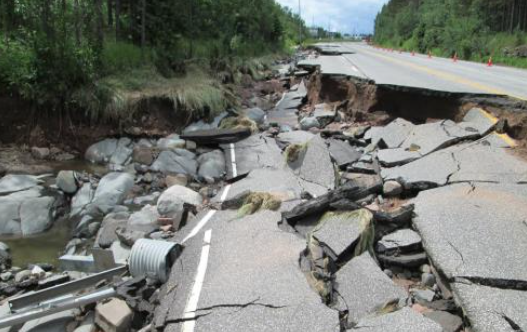