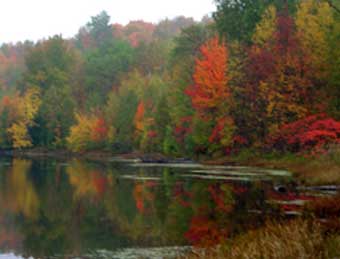 The Potawatomi tribe has long experience in melding traditional wisdom with political and practical approaches to ecological stewardship. Three decades ago, when the Exxon Corp. decided to open the world's largest copper-zinc mine 15 miles south of the Potawatomi Tribe's northeastern Wisconsin land (they also own land in the Milwaukee area, for a total of nearly 19,000 acres), on the doorsteps of two other Great Lakes-region tribes, the Potawatomi Community was faced with a fundamental threat. With guidance from their elders, they chose to act.

The Crandon Mine, says Air Resources Program Director Natalene Cummings, "was going to be a huge underground mine, with cyanide leaching right at the headwaters of the Wolf River," a water source that is sacred to the Mole Lake Tribe. "People were concerned about the water, about how long they would be there and whose responsibility it would be to clean it up."

The resulting struggle, in solidarity with other area tribes, helped launch a new era of activism at Potawatomi-a mindset that continues to run strongly through the community.