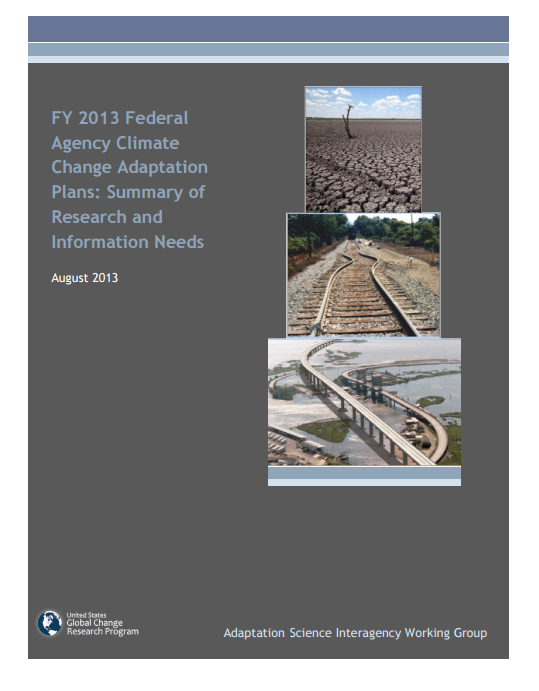 In June 2013, President Obama announced his comprehensive plan for steady, responsible action to cut carbon pollution, prepare the Nation for the impacts of climate change, and lead international efforts to address climate change as a global challenge. The Plan builds on significant progress made during the Administration’s first term on all of these fronts, including those based on the ongoing scientific work of USGCRP’s 13 member-agencies, the Interagency Climate Change Adaptation Task Force in which USGCRP participates, and USGCRP’s National Climate Assessment team (see Box 1).5 The President’s plan contains a full section on the critical need to prepare for the impacts of a changing climate that are already being felt across the country, including by “ensuring that Federal operations and facilities continue to protect and serve citizens in a changing climate.”

In addition to its impacts on communities, public health, businesses, ecosystems, and a range of economic sectors, climate change poses an array of potential challenges and opportunities for Federal Government operations, programs, services, and assets.6 Abrupt and gradual climaterelated changes in sea level, permafrost thawing, extreme precipitation, intense heat waves, sea ice melt, ocean acidification, water scarcity, and an increase in the frequency and severity of climate change-influenced natural disasters are among the risks that the Federal Government needs to consider in order to continue meeting its missions for the Nation in future. Given the impacts the Nation is already experiencing, and the projected changes in climate; we now face the reality mitigation measures alone will not minimize the Nation’s risks to changes in the climate; we must also prepare for and respond to these changes in the climate. Climate change adaptation is a critical step towards ensuring the resilience of the Nation’s built infrastructure, natural resources, and human populations.

In June 2012, the Federal Government took a major step forward by requiring, for the first time, that individual agencies produce Climate Change Adaptation Plans. Under the implementation guidance of Executive Order 13514 – Federal Leadership in Environmental, Energy, and Economic Performance, each Federal agency was required to include a climate change adaptation and action plan as an appendix to its annual Strategic Sustainability Performance Plan. In these plans, agencies were asked to: (1) develop a high-level vulnerability analysis; (2) identify appropriate adaptation actions; and (3) develop an implementation plan for fiscal year 2013 (FY13). The plans were intended to help agencies identify actions to reduce and manage the harmful effects climate change and take advantage of new opportunities that climate change may bring, primarily as related to agency missions.7 Agencies consulted a number of resources as they compiled adaptation plans, and the U.S. Global Change Research Program (USGCRP) was cited uniformly as one of the best resources for climate science and climate change information to support the development of agency adaptation plans and actions.

Following submission of the FY13 Agency Climate Change Adaptation Plans, the Office of Management and Budget (OMB) and the Council on Environmental Quality (CEQ) reviewed each plan (June 2012 – January 2013) and then released the plans to the public8 (February 2013), beginning a 60-day public comment period that ended in April 2013. The agencies are now focused on implementing the actions they put forth in their plans, and preparing to update their Adaptation Plans in future years.