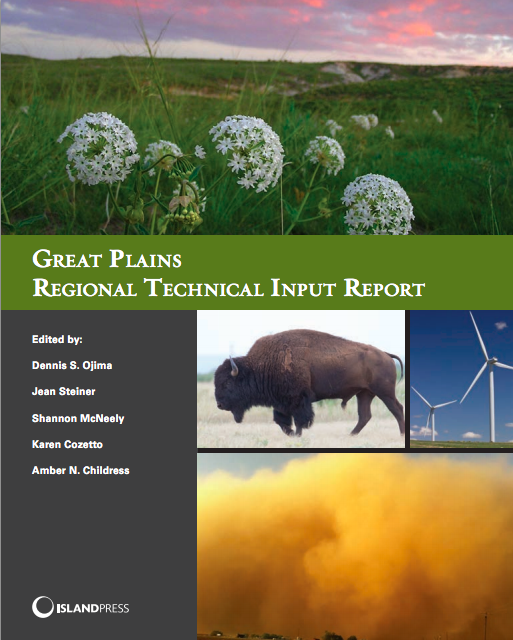 This report assesses how the Great Plains social-ecological system has been shaped by changing climate conditions and how future projections of climate change will result in a need for further adaptation and preparedness. This effort is part of the 2014 United States Global Change Research Program National Climate Assessment as required by the United States Congress.

The Great Plains region plays a very important role in providing food and energy to the economy of the United States from the great corn and wheat fields and rangelands in the agricultural sector, the Bakken Shale formation in North Dakota, the abundant coal and coal bed methane in the Wyoming and Montana Powder River Basin, bioenergy and wind farms in Texas in the energy sector. This makes the economy and livelihoods in the region extremely sensitive to climate, which means big implications of climate change impacts on the Great Plains region as well as mitigation strategies to reduce greenhouse gases critically important for the entire country. The region is also the home to 65 registered Native American tribes who stand to be vulnerable to climate change while also potentially contributing to innovation in sustainable practices and an alternative energy future. This all makes the Great Plains a complex and interesting place to look at the impacts of climate variability and change.

The Great Plains region is characterized by both high spatial and high temporal climate variability, however, throughout the region climate change is already happening in the Great Plains with an overall warming trend over the last 20 years both annually and in the summer. Climate change is being experienced in a variety of ways such as increased night-time temperature, increased intensity of extreme precipitation events, extended growing season, extended severe droughts, and elevated atmospheric CO2 concentrations. Climate change is projected to continue into the future with more extreme heat events, droughts, and floods. Expected impacts include decreased water availability and increased competition for uses, changed water quality, expansion of weeds, pests, and diseases, changes to plant-animal communities and species composition, altered fire and storm patterns, and tree mortality, among others. Combined with changes in land use and land management, socio-economic and demographic changes, and uncertainty of our energy future, climate change will have substantial impacts on the ability to sustain natural resources, livelihoods, and well being in the Great Plains.

Over the last decade the region has seen significant extremes in climate and weather events from flooding in the Missouri River Basin, to exceptional drought in the Southern Plains, to fires and tornadoes resulting in billions of dollars in economic damage, morbidity, and mortality. Some of this unusual weather is the result of normal climate variability, but many climate experts understand these extremes as indicators of emerging climate changes, if not already a signal that we are seeing effects of a warming planet.