How are Healthy, Working Populations Affected by Increasing Temperatures in the Tropics? Implications for Climate Change Adaptation Policies 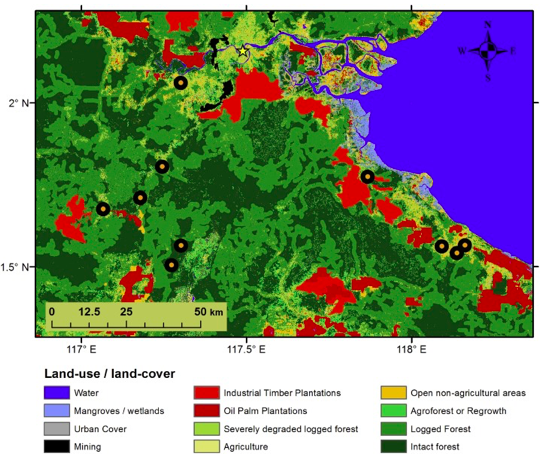 Climate change and land use change are increasing average and extreme temperatures. Hotter temperatures can detrimentally affect workers’ health and their economic productivity and livelihoods, especially in rural areas in industrializing countries that may be more vulnerable and less resilient. A growing literature has examined these factors at large spatial scales, yet few studies have done so at finer scales. Micro-level data from developing regions is needed to understand the extent of heat exposure, as well as current and future adaptation strategies of working, healthy, and rural populations. We fill this gap using objective environmental measurements from 3MTM QuestempTM 46 Heat Stress Monitors, as well as survey data from working, healthy, and rural communities in East Kalimantan, Indonesia. Our data contain two groups: those who work in only open areas, and those who work in both forests and open areas. We document workers’ livelihood strategies, work schedules, perceptions of how temperatures impact their work, and future adaptation strategies for even hotter days. Ambient temperatures are 2.6–8.3 °C cooler in forests compared to open areas, indicating the temperature effects of deforestation can be immediate and significant. Those working only in open areas face up to 6.5 h of exposure to temperatures above the accepted Threshold Limit Value for worker well-being. Workers adapt to hotter temperatures by altering the timing of their work shifts and breaks, indicating our sample is already adapting to increasing temperatures from climate and land use change. We also find differential adaptation strategies between those working only in open areas compared to those working in both forests and open areas, suggesting current acclimatization may be a factor in how people adapt. Our results suggest the need for adaptation and mitigation policies tailored to the unique constraints of rural workers that specifically incorporate extant adaptation strategies.