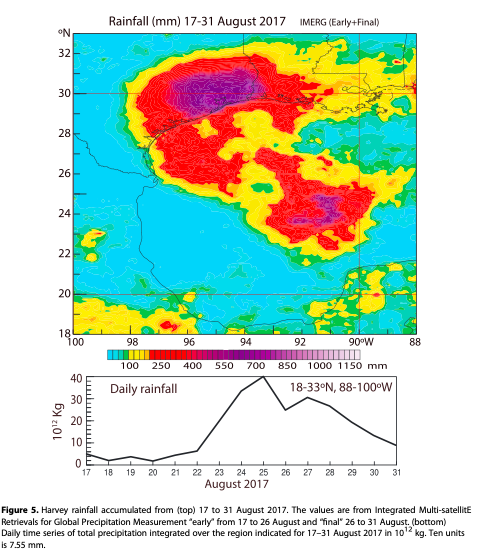 While hurricanes occur naturally, human-caused climate change is supercharging them and exacerbating the risk of major damage. Here using ocean and atmosphere observations, we demonstrate links between increased upper ocean heat content due to global warming with the extreme rainfalls from recent hurricanes. Hurricane Harvey provides an excellent case study as it was isolated in space and time. We show that prior to the beginning of northern summer of 2017, ocean heat content was the highest on record both globally and in the Gulf of Mexico, but the latter sharply decreased with hurricane Harvey via ocean evaporative cooling. The lost ocean heat was realized in the atmosphere as moisture, and then as latent heat in record-breaking heavy rainfalls. Accordingly, record high ocean heat values not only increased the fuel available to sustain and intensify Harvey but also increased its flooding rains on land. Harvey could not have produced so much rain without human-induced climate change. Results have implications for the role of hurricanes in climate. Proactive planning for the consequences of human-caused climate change is not happening in many vulnerable areas, making the disasters much worse.

Human-induced climate change continues to warm the oceans which provide the memory of past accumulated effects. The resulting environment, including higher ocean heat content and sea surface temperatures, invigorates tropical cyclones to make them more intense, bigger, and longer lasting and greatly increases their flooding rains. The main example here is Hurricane Harvey in August 2017, which can be reasonably isolated in terms of influences on and by the environment. Hurricanes keep tropical oceans cooler as a consequence of their strong winds that increase evaporation. Here we show for the first time that the rainfall likely matches the evaporation and the corresponding ocean heat loss. Planning for such supercharged hurricanes (adaptation) by increasing resilience (e.g., better building codes and flood protection) and preparing for contingencies (such as evacuation routes, power cuts, and so forth) is essential but not adequate in many areas, including Texas, Florida, and Puerto Rico where Harvey, Irma, and Maria took their toll.