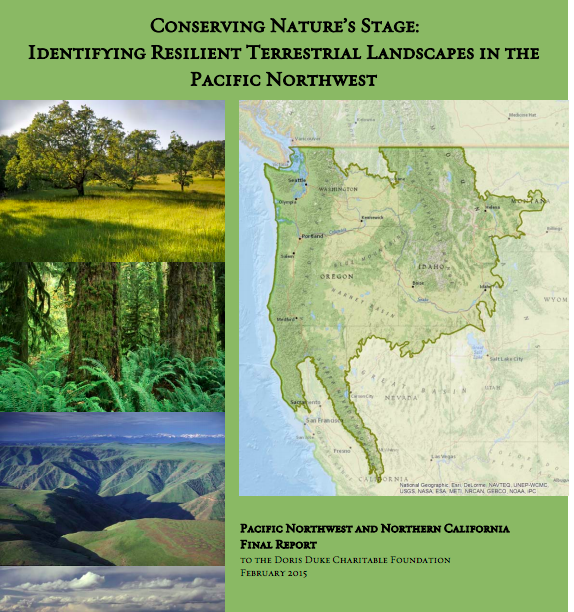 This report represents the culmination of a project completed in two phases funded by the Doris Duke Charitable Foundation. The first phase focused on adapting a process developed by The Nature Conservancy in the Northeastern US to identify and map sites most resilient to climate change (Anderson et al. 2012) to the landscapes and environments of the Pacific Northwest. The 67 million hectare project area included all of the Columbia Plateau, East Cascades/Modoc Plateau, and Middle Rockies/Blue Mountains ecoregions as well as the US portion of the Canadian Rockies (see map 4.1). The second phase expanded our geography to include the ecoregions west of the Cascade crest. This 25 million hectare area includes all of the West Cascades, Klamath Mountains, California North Coast and Sierra Nevada ecoregions and the US portions of the Willamette Valley/Puget Trough, Pacific Northwest Coast, and North Cascades ecoregions.

The goal of this project was to identify areas in the Northwest that collectively and individually best sustain native biodiversity, even as the changing climate alters current distribution patterns, in order to guide future conservation investment (TNC 2011, 2013). We refer to these areas as resilient sites. Herein we use the term resilience (modified from Gunderson 2000) to refer to the capacity of a landscape or ecoregion to maintain biological diversity and ecological function despite climatic change.