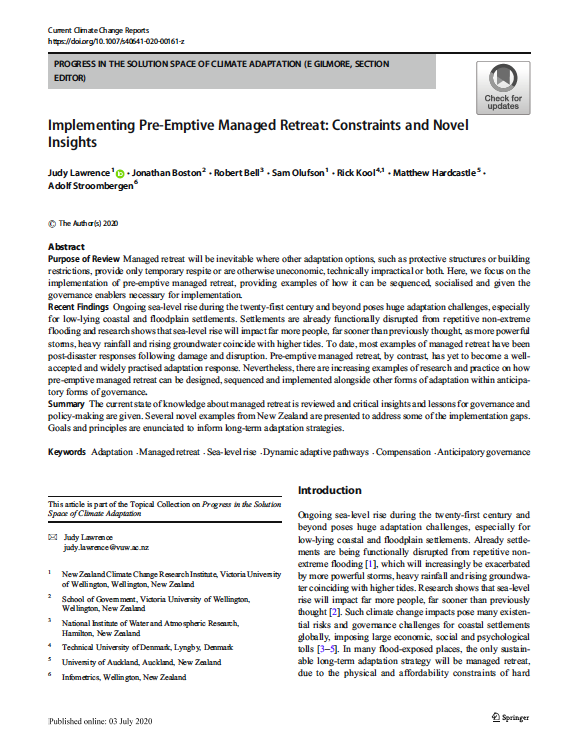 Managed retreat will be inevitable where other adaptation options, such as protective structures or building restrictions, provide only temporary respite or are otherwise uneconomic, technically impractical or both. Here, we focus on the implementation of pre-emptive managed retreat, providing examples of how it can be sequenced, socialized and given the governance enablers necessary for implementation.

Ongoing sea-level rise during the twenty-first century and beyond poses huge adaptation challenges, especially for low-lying coastal and floodplain settlements. Settlements are already functionally disrupted from repetitive non-extreme flooding and research shows that sea-level rise will impact far more people, far sooner than previously thought, as more powerful storms, heavy rainfall and rising groundwater coincide with higher tides. To date, most examples of managed retreat have been post-disaster responses following damage and disruption. Pre-emptive managed retreat, by contrast, has yet to become a well-accepted and widely practiced adaptation response. Nevertheless, there are increasing examples of research and practice on how pre-emptive managed retreat can be designed, sequenced and implemented alongside other forms of adaptation within anticipatory forms of governance.

The current state of knowledge about managed retreat is reviewed and critical insights and lessons for governance and policy-making are given. Several novel examples from New Zealand are presented to address some of the implementation gaps. Goals and principles are enunciated to inform long-term adaptation strategies.