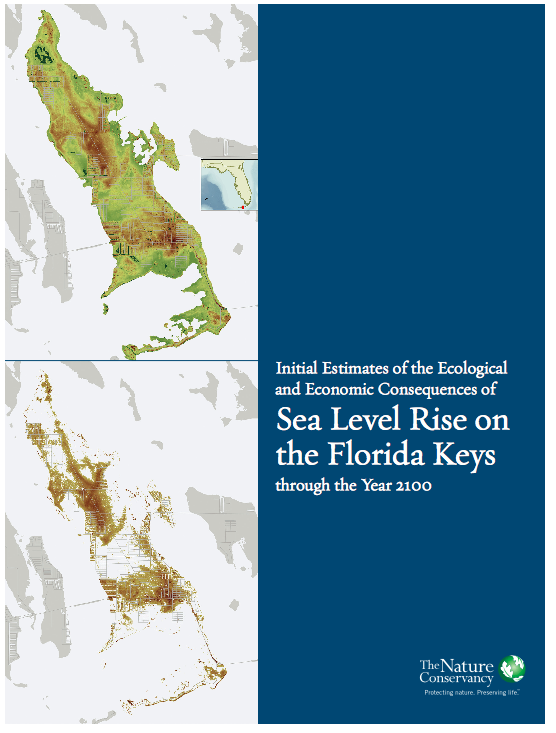 Climate change is happening now at an unprecedented rate. Sea level rise is one of the more predictable and most profound consequences of climate change. In the next one to three centuries, sea level rise is likely to nullify most, if not all, that has been done over the past century to protect the terrestrial plants, animals and natural communities of the Florida Keys. Negative impacts on the built environment and human communities are also likely to be serious and irreversible. In 2007 The Nature Conservancy acquired high-resolution Digital Elevation Models derived from airborne Light Detection and Ranging (LIDAR) data for Big Pine Key. Future shoreline locations and distribution of major habitats of Big Pine Key in the year 2100 were estimated using sea level rise scenarios described in the scientific literature. Estimation of property value losses for Big Pine Key was based on the same 2100 sea level rise projections using 2008 values. In every scenario the island becomes smaller, marine and intertidal habitat moves upslope at the expense of upland habitat, and property values are diminished. In the best-case scenario, 18 cm (7 in.) of sea level rise, 1,840 acres (34 percent) of Big Pine Key are inundated resulting in the loss of 11 percent of the island’s upland habitat. This degree of inundation would displace native species dependent on upland habitat and threaten $40 million of property value. Four other scenarios are modeled for Big Pine Key using the same high-resolution data. With a rise of 140 cm (4.6 ft.), the highest modeled rise, about 5,950 acres (96 percent) of the island would be inundated with all upland habitat and $1.6 billion in property value lost. Beyond Big Pine Key, year 2100 outlooks for the entire Florida Keys were modeled using the best-available elevation data. Now is the time for a coordinated effort to identify the long-term impacts of sea level rise on the Florida Keys and to begin taking near-term steps to minimize the negative consequences of those impacts. Mitigation of the root causes of climate change and sea level rise — most prominently greenhouse gas emissions and deforestation — is critical and must take place at every scale, from global to local. However, mitigation must be paired with carefully planned and implemented local strategies to help terrestrial natural areas and native species resist and ultimately adapt to inevitable change. Any such strategies must take into account the fact that Florida Keys residents and the government institutions that serve them will also need to resist and adapt to sea level rise.