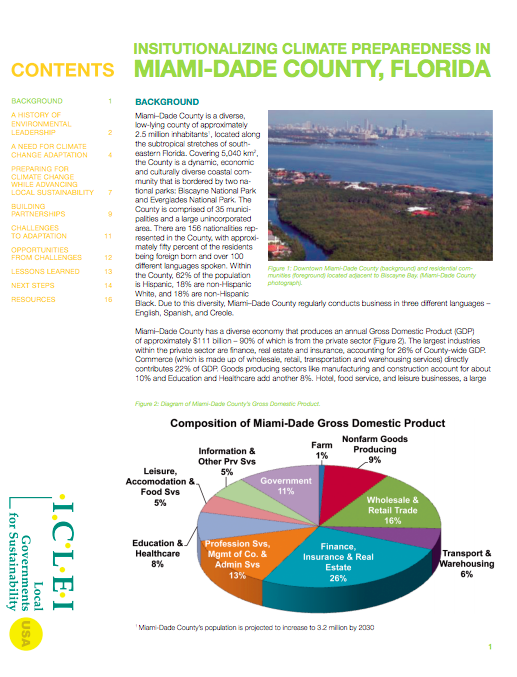 As a coastal community located at sea level and surrounded by water on three sides, with typical land elevation only three to ten feet above mean high water, Miami–Dade County is acutely aware of the dangers posed by climate change. Climate changes, including sea level rise, increases in temperature, changes in precipitation patterns, and changes in the intensity and/or frequency of extreme events all threaten the health and safety of residents, the integrity of infrastructure, and the vitality of regional ecosystems. In 2007, the Organization for Economic Cooperation and Development (OECD) quantifi ed the vulnerability of various municipalities across the world towards climate change and identifi ed Miami–Dade County as having the highest amount of vulnerable assets exposed to coastal flooding (for the 2070’s) with a projected potential cost of approximately $3.5 trillion.Moreover, the County’s geographical location at the tip of a peninsula, its large, dense population, and the reality that many key economic drivers for the county are weather dependent (e.g. tourism and agriculture), have created a clear impetus to plan for climate change. To help start with the climate planning process, the County worked with local and regional climate scientists to review regionally specifi c climate models. These climate models predict an increase in temperature over the next 50 years between 4.5–9 degrees Fahrenheit (depending on the greenhouse gas emissions scenario),with a notable increase in the number of days over 90 degrees. The greatest temperature increases are expected during the summer months – which can have signifi cant implications on energy demand, exacerbate heat waves, and lead to greater evapo-transpiration, resulting in an impact on water supply, as well as local agriculture. These increases in temperature could also lead to more heat related illnesses and deaths, the spread of disease vectors, shifts in agricultural production and growing areas, droughts and excessive crop damage, and affect the viability and habitat of native plant and animal species.