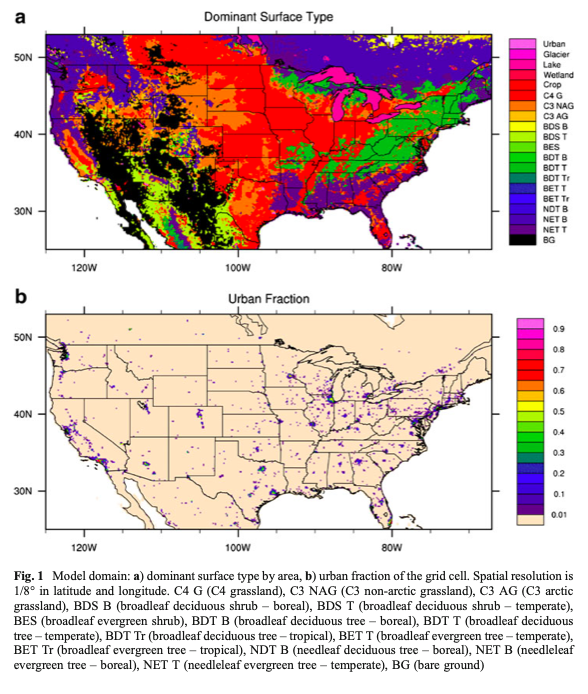 Heat stress (HS) is a leading cause of weather-related human mortality. As temperatures continue to increase due to climate change, HS is expected to worsen. HS can be magnified in urban areas because of the urban heat island effect. We use an urban canyon model coupled to a land surface model to quantify present-day and projected mid-21st century rural and urban HS for boreal summer over the U.S. and southern Canada and examine the effects of three urban density classes on HS. Five indices of HS are implemented in the model [the NWS Heat Index (HI), Apparent Temperature (AT), Simplified Wet Bulb Globe Temperature, Humidex, and Discomfort Index]. The present-day urban-rural contrast in HS differs according to which index is used. The HI and Humidex have higher urban-rural HS for all density classes than defined by temperature alone. Future urban HS is amplified by 0.5–1.0 °C for the AT, HI, and Humidex compared to temperature alone. For four cities examined in further detail, climate change by mid-century increases the number of high HS days and nights in both rural and urban areas, the magnitude being highly dependent on HS index, urban density class, and each city’s climatic setting. Houston exhibits noteworthy mid-century increases in high heat stress nights, with more than half of summer nights qualifying as high HS in not only urban areas but also rural areas, indicating the need to consider vulnerability and adaptive capacity of both rural and urban populations in the context of climate change.