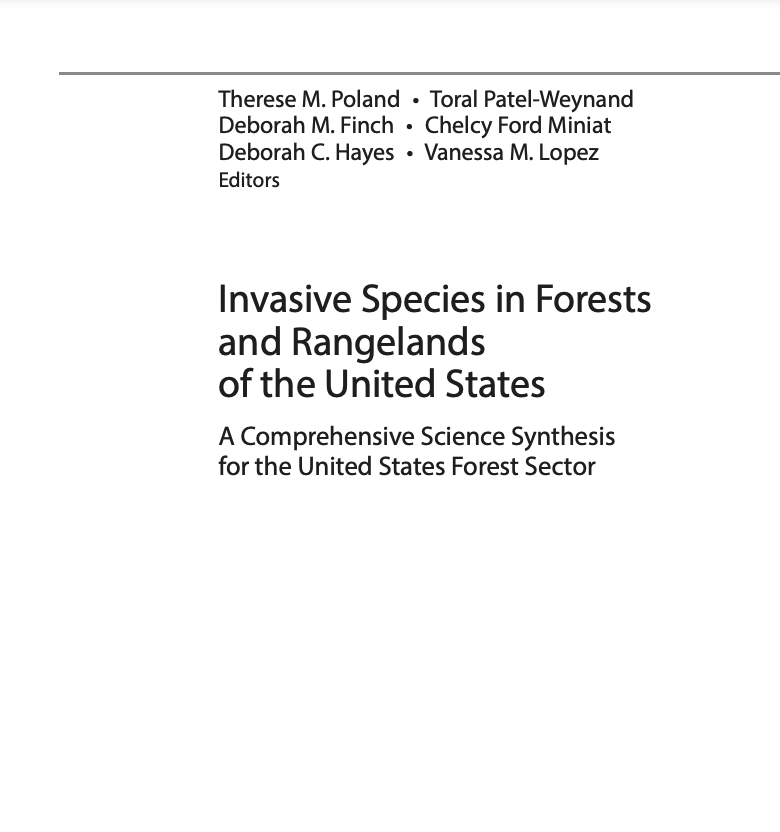 Invasive Species in Forests and Rangelands of the United States is a sector-wide scientifc assessment of the current state of invasive species science and research in the United States. Leading experts on invasive pests, climate change, social sciences, and forest and rangeland management contributed to highlighting the science and identifying knowledge gaps on a diverse array of topics related to invasive species. Stakeholders from nongovernmental organizations, academic institutions, professional organizations, private corporations, and state and federal agencies representing public, private, and tribal interests also provided input to the assessment. Input from these stakeholders helped to frame the subject matter content and management options presented in this report, ensuring relevance for decision-makers and resource managers.

Invasive species tend to have high dispersal abilities, rapid growth with short generation times, and high tolerance of broad environmental conditions. Collectively, these traits are associated with successional species regardless of their geographic origin. These traits greatly enhance the ability of species to adapt to new habitats and cope with rapid changes in environmental conditions, such as those associated with climatic variability and change. Climate-related changes will almost certainly lead to changes in the distribution of invasive species, as their populations respond to variability and changes in temperature, moisture, and biotic interactions. Predicting how invasive species will respond under potential climate change scenarios is difficult but essential to developing effective prevention, control, and restoration strategies.

Disturbances can also have a major influence on ecosystem vulnerability. Increased levels of disturbances generally increase the probability of invasive plant species becoming established and spreading, while increased native biodiversity, in the absence of disturbances, reduces the probability of invasion. Invasive plants that were deliberately introduced for horticulture are possibly more likely to invade adjacent undisturbed forests than are weedy species that are accidentally introduced. The probability of insect pest and plant pathogen invasion is indirectly tied to disturbances and native biodiversity through their effects on the availability and spatial distribution of suitable hosts.