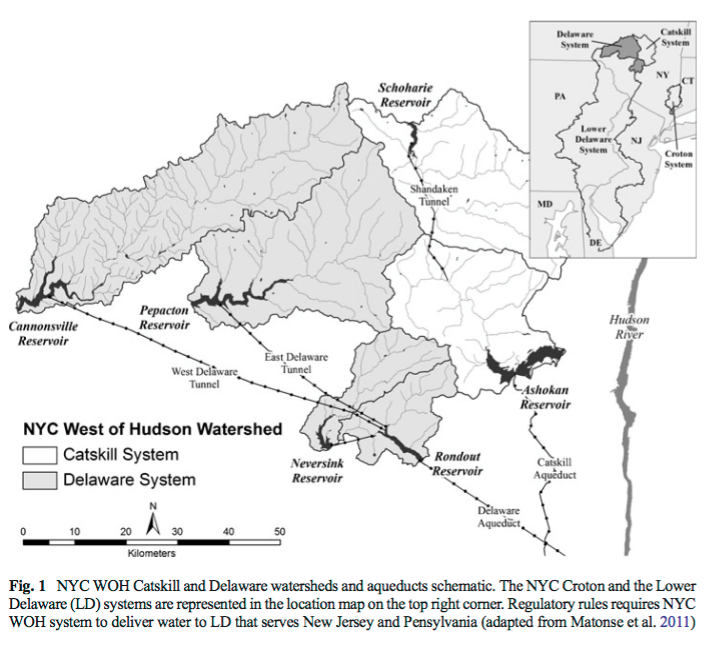 Future climate scenarios projected by three different General Circulation Models and a delta-change methodology are used as input to the Generalized Watershed Loading Functions – Variable Source Area (GWLF-VSA) watershed model to simulate future inflows to reservoirs that are part of the New York City water supply system (NYCWSS). These inflows are in turn used as part of the NYC OASIS model designed to simulate operations for the NYCWSS. In this study future demands and operation rules are assumed stationary and future climate variability is based on historical data to which change factors were applied in order to develop the future scenarios. Our results for the West of Hudson portion of the NYCWSS suggest that future climate change will impact regional hydrology on a seasonal basis. The combined effect of projected increases in winter air temperatures, increased winter rain, and earlier snowmelt results in more runoff occurring during winter and slightly less runoff in early spring, increased spring and summer evapotranspiration, and reduction in number of days the system is under drought conditions. At subsystem level reservoir storages, water releases and spills appear to be higher and less variable during the winter months and are slightly reduced during summer. Under the projected future climate and assumptions in this study the NYC reservoir system continues to show high resilience, high annual reliability and relatively low vulnerability.