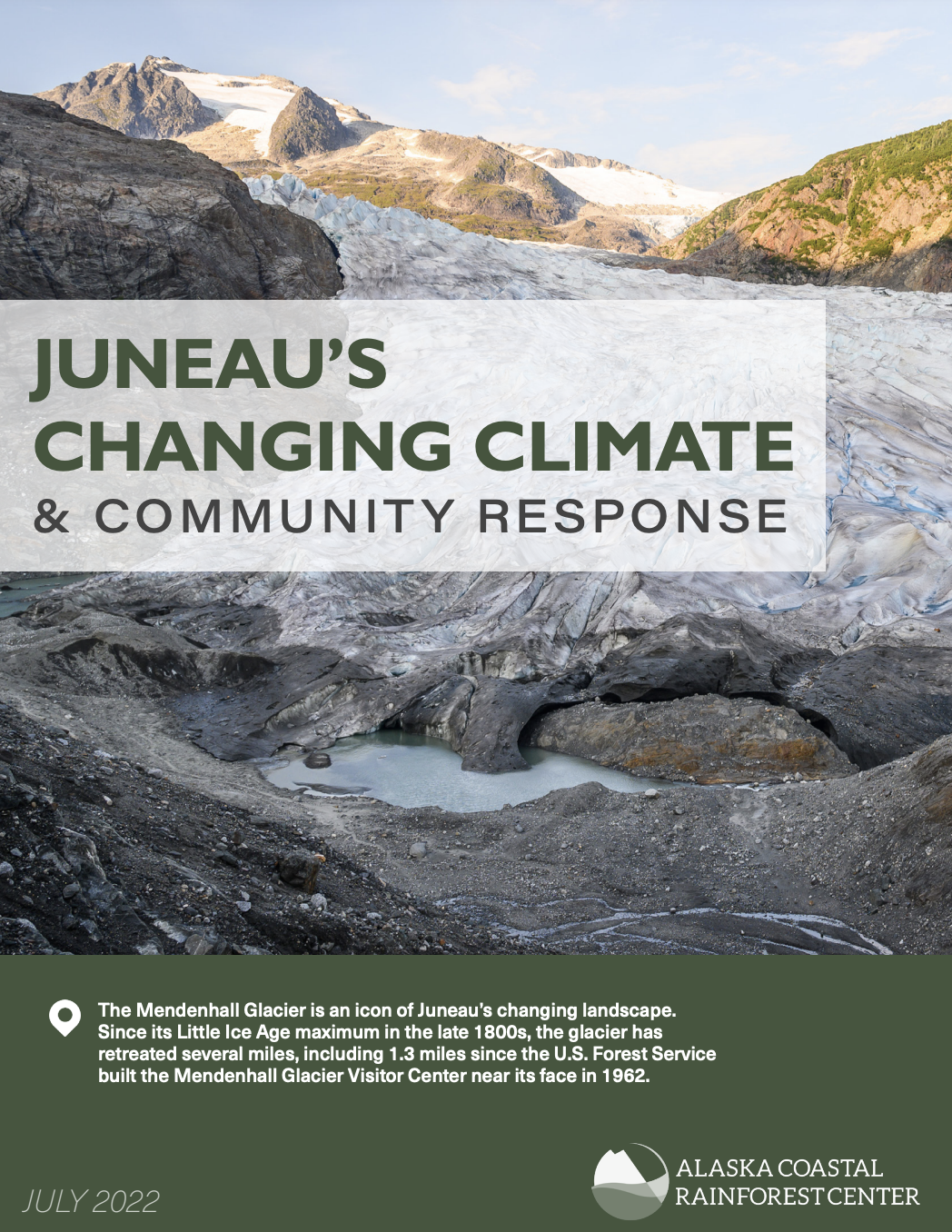 The Alaska Coastal Rainforest Center (ACRC) is pleased to bring you this report on climate change. ACRC and the University of Alaska Southeast Juneau reside on the ancestral lands of the Áak’w Kwáan Tlingit. Long before western observations of climate change, Indigenous people of Southeast Alaska observed and responded adaptively to changes in this dynamic environment, including rapid glacial advances and retreats, sea-level rise and fall, and a host of extreme events that are well-documented in oral histories. We honor and respect Indigenous experience with climate change and the intergenerational wisdom that has guided Alaska Natives through earlier periods of environmental changes.

Now, a new era of climate change unprecedented in human history is upon us, and Juneau, as a modern capital city and regional hub, must respond and adapt accordingly. Juneau’s citizens have launched an innovative carbon offset program, its scientists engage in impactful marine, temperate forest, and glacial research, and its downtown port holds the world’s first plug-in shore power for cruise ships to reduce harmful greenhouse gas emissions. Yet, even with Juneau’s initiatives and successes, many questions remain about the nature and scale of the changes that are undeniably coming.

As the Central Council of Tlingit and Haida Indian Tribes of Alaska (Tlingit & Haida) warns in its 2019 Climate Change Adaptation Plan,  “[We] cannot overstate the urgency for a response to changes in our climate . To that end, this report supports the United Nations Sustainable Development Goal 13, Climate Action, Target 13 .3 which aims to ‘Improve education, awareness-raising and human and institutional capacity on climate change mitigation, adaptation, impact reduction and early warning.’”

ACRC and its research partners, including federal, state, and tribal organizations, and other entities, share this sense of urgency. By prioritizing scientific investigations of local impacts of social-environmental change in the Pacific Coastal Temperate Rainforest and its coastal margins, ACRC seeks to inform the wellbeing of communities, ecosystems, and key species that support the livelihoods, cultures, and socio-economic systems of our unique bioregion.

The information in this report can be summarized in nine key messages:

The Alaska Coastal Rainforest Center (ACRC) is a collaborative organization linking the Unviersity of Alaska, state, federal, and local agencies, and non-governmental organizations.