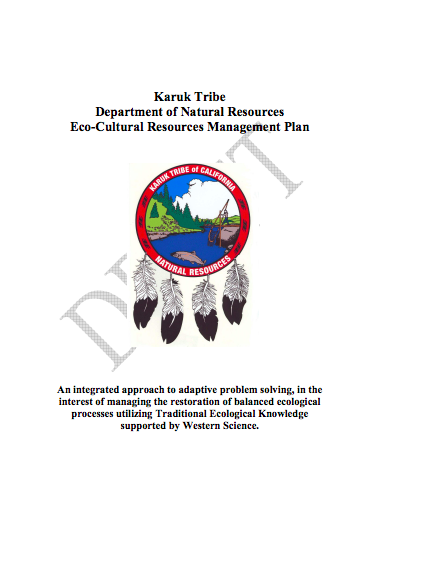 The Karuk Tribe of California (Karuk Tribe) is a federally recognized Indian Tribe (73 Fed. Reg. 18,535, 18, 544 (April 4, 2008)) occupying aboriginal land along the middle course of the Klamath and Salmon Rivers in Northern California. The Tribe’s Aboriginal Territory has been previously mapped and includes an estimated 1.38 million acres, within the Klamath River Basin. This Territory is the land base that was utilized in the process of receiving a determination of Tribal recognition. Nearly all of The Karuk Aboriginal Territory is located concurrent to lands administered by the USDA Forest Service’s Klamath and Six Rivers National Forests.

The Karuk trust lands are composed of individual and Tribal Trust properties scattered along the Klamath River between Yreka and Orleans, California, with Tribal centers and administrative facilities located in Happy Camp, Orleans, Somes Bar, and Yreka. The Constitution of the Karuk Tribe defines the external boundaries of the Karuk Aboriginal Territory and is considered as the planning area for this document.