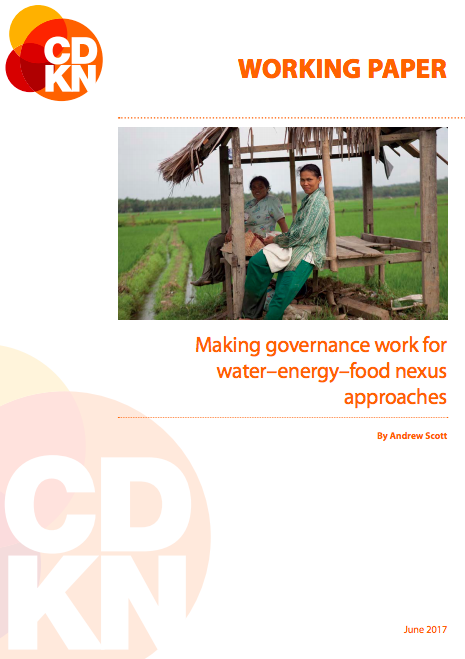 A new CDKN working paper by Andrew Scott of ODI explores the effectiveness of governing for the “water-energy-food nexus” of issues. The author looks at approaches that understand the links between sectors, recognise these in decision-making and promote integrated policy-making.

This paper synthesises findings from CDKN-supported action research in this area. The paper draws from findings in Indonesia, Kenya and the Amazon Basin to show that the effectiveness of the horizontal (cross-sectoral) and vertical (between levels of government) coordination that is essential for a nexus approach is determined by institutional relationships, which can be influenced by political economy factors. The capacity of governing organisations to understand nexus links and to collaborate with each other is also critical.

The paper suggests that aiming for the ideal of comprehensiveness and integration in a nexus approach may be costly and impractical. Nevertheless, horizontal and vertical coordination are essential. Local-level decision-making will determine how trade-offs and synergies in the water–energy–food nexus are implemented. The capacities of local government organisations and decision-makers need to be strengthened to enhance their capacity to adopt nexus approaches and coordinate vertically.