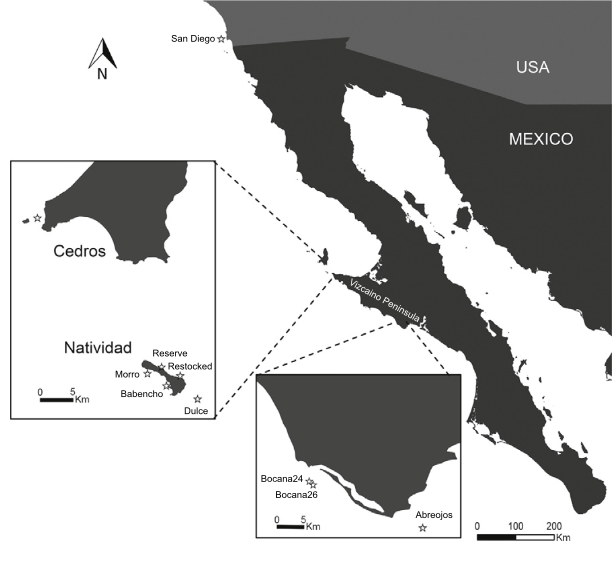 Fig.1. Location of 10 pink abalone populations sampled in USA and Mexico. Exact locations are indicated by stars (⋆), including a marine reserve and a restocked site on the eastern side of Isla Natividad.

Genetic diversity is crucial for the adaptation of exploited species like the pink abalone (Haliotis corrugata), faced with threats from climate change, overfishing and impacts associated with aquaculture production. While marine reserves are commonly used to mitigate risks to marine populations, the duration, size, location and larval connectivity needed for a reserve to help conserve genetic resources is still poorly understood. Here, we examine the effects of fishing, reserves, and restocking on the genetic diversity of 10 populations from central Baja California, Mexico, and Southern California, USA. We demonstrate that each population shows characteristic genetic signatures according to recent management decisions. We found high allelic diversity, particularly rare alleles, a larger effective population size and a lack of a recent genetic bottleneck in pink abalones within a small (0.8 km2), recently established (5 years) reserve in Baja California, compared to other fished sites after a climatic bottleneck. Higher diversity may result from the presence of older animals in the reserve. Due to its location, the reserve may also act as an important hub connecting distant populations via larval dispersal. In contrast, a population from California showed genetic isolation, loss of allelic diversity and high relatedness, consistent with the collapse of fisheries in the 1990s and their lack of recovery thereafter. In addition, a fished area in Baja California with a history of restocking for over a decade showed an increase in frequency of related individuals and high genetic differentiation from nearby sites that were consistent with the production of larvae from a few adults in the laboratory. A network of strategically placed small marine reserves that considers ocean circulation patterns could help to maintain genetic diversity and connectivity of exploited populations.