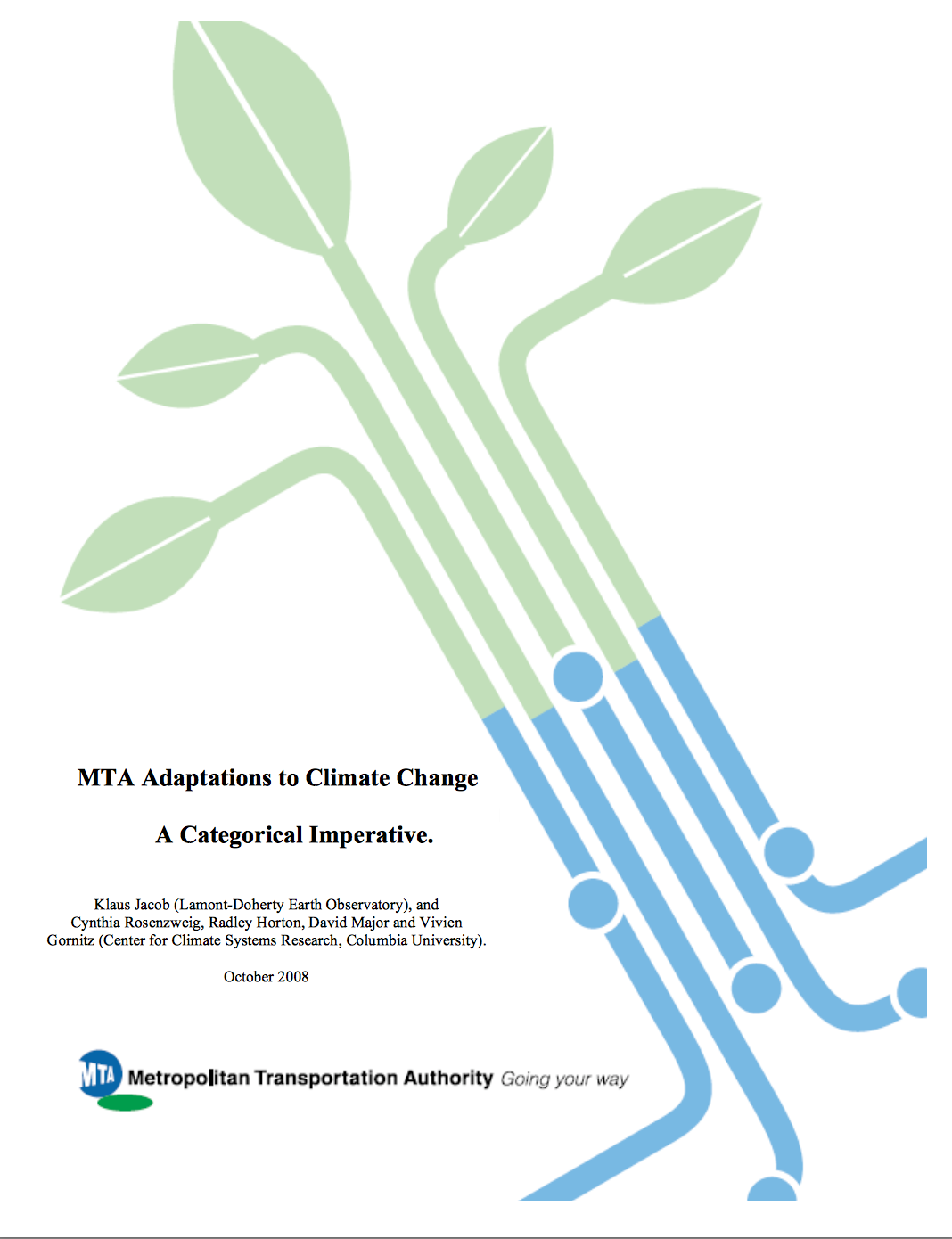 For organizations to survive, flourish and deliver public services, they must adapt to changing conditions and demands. Climate change is such a demand. Already it has impacted MTA facilities and operations, and will do more so during this century and beyond. The climate-induced change of the physical environment necessitates that MTA find an effective way to adapt its infrastructure, operations, and policies. This chapter provides a risk-based framework for adaptations to climate change. A risk-based, systematic approach to adaptation is important now because of the long lifetimes of urban infrastructure, long planning horizons, and the significant social, economic, and environmental risks faced by urban coastal areas already. New Orleans and hurricane Katrina are an extreme case in a special location far from the MTA service area, but they can serve as a wake-up call: lack of preventive action in the face of known threats can lead to unacceptable losses and outcomes. But not just such extreme events need attention. More frequent seemingly lesser events cause considerable disruptions and losses, as demonstrated by the modest storm of Aug 8, 2007 (MTA 2007). It severely disrupted much of the region’s mass transit. In addition, MTA facilities face a long-term threat from rising sea levels and higher storm surges.

Adaptation measures fall into different categories, and may follow distinct timelines and decision paths: first, a general adaptation policy needs to be adopted to guide the MTA leadership and MTA agencies in their adaptation efforts. It should include the mandate to develop a set of general performance standards for its facilities and operations vis-à-vis climate change; the implementation of these policies will require, in turn, agency-wide vulnerability assessments of the MTA’s physical assets and operations; an engineering- based feasibility assessment of remediation options with estimates of the economic, environmental, and social costs and benefits associated with the various risk reduction measures; MTA actions may require extensive cooperation and integration with other stakeholders, agencies, governments, communities and planning organizations.

These emerging adaptation plans will need to be fully integrated into the fiscal planning process, including preparation of long-range capital spending plans. The planning process will need to develop solutions for different time horizons: a short- term horizon for the next decade or less; a mid-range horizon of several decades; and a long-range preview on the order of a century or even longer. Such long time horizons typically apply to long-lasting infrastructure (e.g. bridges, tunnels, rights-of-way). On these longer time scales some climate-change-related threats (e.g. sea level rise and related storm surge inundations) could become severe and may require much more broadly based (regional, multi-agency) land-use and urban planning solutions than the shorter time horizon’s tasks demand. The National Academies (2008) have issued a report that outlines a framework for climate change adaptation specifically aimed at the transportation sector. It provides valuable information and generic guidance.

Some major regional adaptation measures (e.g. whether to consider regional storm barrier systems or not) constitute substantial policy issues that will require full coordination and joint actions with many levels of government and with stakeholders in the public and private sector, since larger and very fundamental social, economic and environmental issues related to land-use, urban planning and sustainability of entire communities and their livelihoods are at stake, if not those of the entire City and metropolitan region.

Climate risks to coastal urban areas largely stem from temperature rise, changes in precipitation, and sea level rise (SLR) and consequent higher storm surges. They manifest themselves by the frequency, intensity and duration of extreme events including heat waves, droughts, river and street flooding, and storm- and sea-level-rise-induced coastal flooding. Some of the MTA systems are more vulnerable than others: low-lying fixed structures such as below-sea-level road- or subway-tunnels, or near-sea-level railroad tracks, rail yards and shops are more prone to coastal and urban street flooding than bus routes that can be readily rerouted on short notice according to flood conditions.

In planning for adaptation, it is important to recognize that there is no “one size fits all” approach. For given expectations about climate change, different adaptations are appropriate for different types of facilities and their different life spans or criticalities. Rail yards, for example, may need hard protection against rising sea levels and storm surges, whereas other facilities, such as recreation areas, open space, and parking lots, can be allowed to flood temporarily at acceptable frequencies. A facility that will last for 20 years may not require significant adaptation now, whereas a substantial transportation facility with a lifetime of 100+ years and tied to a given right of way will require important adaptation elements with a well planned schedule. The timing of adaptations will differ according to rehabilitation and replacement cycles in addition to magnitude of risk exposure as, in general, adaptations to climate hazards are less expensive when undertaken as part of otherwise needed rehabilitation, replacement, or expansions.

The most challenging decisions may be those where MTA programs are tied to landuse-, community-, urban and regional planning that at some point in time may require the abandonment of land, real estate, or rights of way used for generations, or may need radical and expensive measures to raise or otherwise protect the infrastructure and/or communities from the risk of rising waters. As the last resort, options may include relocation and may require new rights-of-way at safer elevations.

This Adaptation Chapter expands on these general ideas as they apply to MTA facilities, operations, capital planning procedures, and related policies.