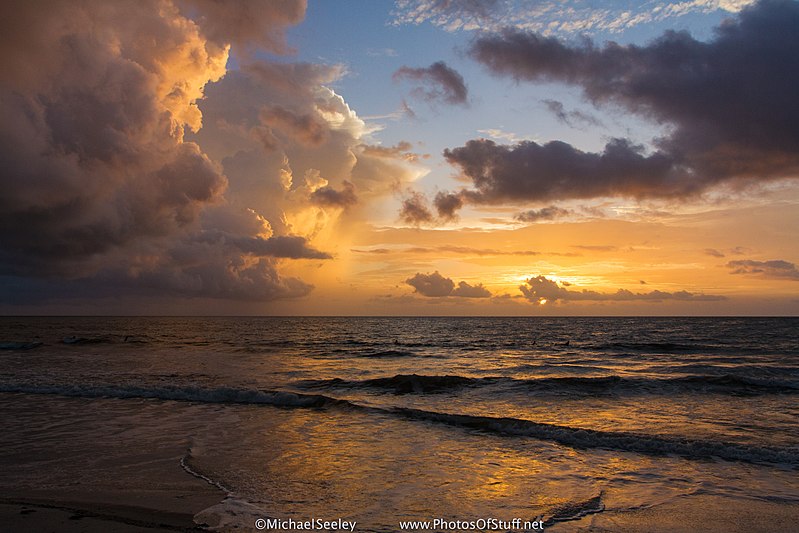 Photo attributed to Michael Seeley. This file is licensed under the Creative Commons Attribution 2.0 Generic license. No endorsement implied.

It is now widely accepted global sea level will rise a meter or more by the year 2100, yet prior to this investigation no local government along the east-central Florida coast had begun to seriously address the potential consequences of concomitant erosion and inundation. In the fall of 2009, the City of Satellite Beach (City), Florida, authorized a project designed to: (1) assess municipal vulnerability to rising sea level and (2) initiate the planning process to properly mitigate impacts.

Results indicate about 5% of the City landscape will submerge during the initial +2 ft (0.6 m) rise, with inundation generally restricted to fringing wetlands and finger canal margins proximal to the Banana River. At +4 ft (1.2 m), 25% of the City is submerged including South Patrick Drive, one of two major transportation corridors through the City. Residential areas in the north- (c.f. Pelican Coast) and south-west corners of the City are subject to limited inundation. At an elevation of +6 ft (1.8 m), 52% of the City is underwater including the entire western half centered on South Patrick Drive. Much of the Pelican Coast neighborhood is submerged, as are residential areas located in the southwest portion of the City. The function of “critical assets” (i.e., fire/rescue), designated emergency evacuation routes (i.e., South Patrick Drive), and the gravity driven storm-water system is compromised proportional to the magnitude of rise.

Based primarily upon the City’s hypsographic curve, the “tipping point” towards catastrophic inundation is +2 ft (0.6 m), forecast to occur around 2050. Thus, the City has about 40 years to formulate and implement a mitigation plan. The City appears likely to respond through adaptive management. This is an on-going and iterative process that specifies one or more essential actions necessary to reduce the vulnerability to rising seas. As an initial step, the Comprehensive Planning Advisory Board, a volunteer citizen committee serving as the City’s local planning authority, has approved a series of updates and revisions to the City’s Comprehensive Plan. If approved by the City Council, the amendments will provide a legal basis for implementing an adaptive management plan and specific actions designed to mitigate the City’s vulnerability to sea-level rise.