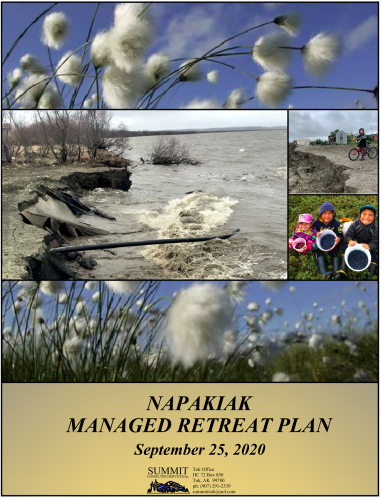 The mission of the Napakiak Managed Retreat Plan is to document the efforts of the community to protect their resources, the coordination between community members and agencies, define the extent of the threat, and to provide the framework for an orderly retreat of the community to a safe and sustainable location.

The village of Napakiak is a traditional, Yupik community of 344 residents located on the banks of the lower Kuskokwim River within the Yukon-Kuskokwim Delta. The Kuskokwim River provides life, subsistence, and travel for the residents of the area as it has for thousands of years of nomadic existence. Today, Napakiak and other communities have settled in more permanent villages that are tied to modern infrastructure such as schools, sanitation, and health facilities while still supporting a culture that is closely tied to the river. These villages are subject to the river’s natural forces of erosion and flooding—both increasingly unpredictable and destructive due to climate change.

Napakiak has been losing land to the river for decades and residents have consistently worked to care for their own by moving homes away from danger and protecting the river banks. These efforts are quickly reaching a point of minimal return as several factors combine. Erosion is now imminently threatening costly and immobile infrastructure: the school where children receive a safe space for education and the airstrip that provides a life line to the outside are only two examples. To make matters more urgent, the threat of flooding is projected to increase in coming years. Erosion that used to occur primarily in the spring and fall now appears to be accelerating and occurring over more of the ice-free months. Napakiak has been designated a Priority Action community by the U.S. Army Corps of Engineers meaning that erosion issues warrant immediate and substantial Federal, State, or other intervention. This designation means that “erosion is threatening the viability of the community, significant resources are being expended to minimize such threats, or both conditions are present.” As this plan is being published (September 28, 2020), the river has moved to within 100 feet of the school. Sixty feet of land was lost in the first half of summer 2020. The recent study, Environmental Risk Assessment to Increase Napakiak Community and Infrastructure Resilience, completed in September 2019, found that the majority of the current critical community infrastructure in Napakiak is expected to be eliminated by 2030. The community’s water source and their only general store are next in line. With these advancing threats it is clear that portions of the community between the airstrip and the river are imminently threatened and retreat must proceed without further delay.

In previous planning efforts, the City and Tribal Councils identified relocation of the village to the nearby bluff as its primary objective. However, the Councils and the local Corporation are currently in agreement that while this is a long-term goal and likely a necessity, time has run out. The short-term objective now is the retreat to the western end of the island while planning for and obtaining funding to retreat to the bluff. This work has led to the development of a plan that includes immediately vacating the area between the airstrip and the river to the western side of the island while monitoring and studying the erosion and flooding threats. But this is not enough. The river will continue advancing. Work must also begin to plan for the long-term retreat to the bluff.

This process is expected to continue over the next several years and into the coming decades. It is important for the community and their partners to continue diligently working towards the goals as defined in this plan and as they are updated in coming years. Throughout this process, the community’s guiding principles include:

A Project Charter has been drafted outlining the goals and responsibilities of the team with the goal of improving this coordination. The Project Charter is included in the appendices of this plan. Residents of Napakiak appreciate the support of our Federal and State partners as our team works to build a better future for the people of this village. We understand that Napakiak is not the only threatened community and we hope that this work will help to set a precedent for sustainable and responsible reactions to environmental hazards.